Saint Paul, Minn., Calumet Editions announced that it will publish The Serpent’s Disciple, a conspiracy thriller ripped from the headlines, by Deborah Stevens.
The book’s springboard is derived from the 1978 event in which Pope John Paul I was about to release a list of names of the clergy within the Vatican who belonged to an illegal Masonic Lodge known as Propaganda Due or P2. The next day, the pope was found dead. 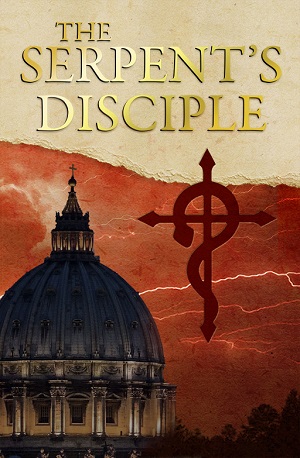 In The Serpent’s Disciple, an ancient evil threatens to take over the Catholic Church and use it to create a New World Order. Thirty years after Pope John Paul’s death, Peter Romanus, the Grand Master of Propaganda Due, sets in motion the plot to kill the pope and supersede him—and take control of major world governments through the Church.
While visiting their father’s birthplace of Pesaro, Italy, the lives of Anthony and Nelli Andruccioli become entwined with the Grand Master’s plot. A 600-year-old family secret and an ancient artifact could save humankind from this diabolical leader many fear is the Antichrist. Anthony and Nelli learn of their family’s deep and ancient connection to Saint Anthony, and they are called to protect the Church: Nelli as the Chosen One and Anthony as one of the Guardians sworn to protect her from the false prophet. Together they must navigate the labyrinth of ancient prophecy and Vatican politics to expose the truth before it is too late.
Stevens began the book choosing Rome and her father’s birthplace of Pesaro, Italy to center the story around. Then she searched for a secret society to use in the novel. While conducting her research, the Catholic Church was constantly in the headlines so she decided to combine all three elements. “This is where it got strange. While researching, I discovered that Pesaro, the secret society, and the Church were linked to each other in some way. Then the story took on a life of its own, directing me on a journey that I never could have predicted,” says Stevens.

“Deborah Stevens is a master storyteller and plotter—the stuff best sellers are made of. If youlove fiction thrillers based on fact, then The Serpent’s Disciple should be high on your list of books to read,” says Sybil Smith, publisher of Smith House Press. The Serpent’s Disciple is the first in a series of thrillers, a new voice for followers of Dan Brown, Steve Berry, and Daniel Silva—to name a few. Stevens is looking at the release of the sequel to The Serpent’s Disciple, titled “The Holy Predator,” out this October 2018.

“Anyone who was captured by the intrigue and mystery of The Da Vinci Code is going to be enthralled in this can’t-put-it-down masterpiece. Stevens wraps you up and doesn’t let you go. Definitely a recommended reading must,” says David P. Holmes, author of Hell Burger, Hell’s Doorstep, Emily’s Run, and grace and acceptance.

Deborah Stevens was raised in Lincoln Park, Michigan outside of Detroit, received a B.A. from Michigan State University and currently makes her home in Saint Paul, Minnesota. An avid traveler, Stevens has been to Europe, Hawaii, and the Caribbean, and has a soft spot for her ancestral home of Italy.

Available as Paperback & EBook from Amazon.com.