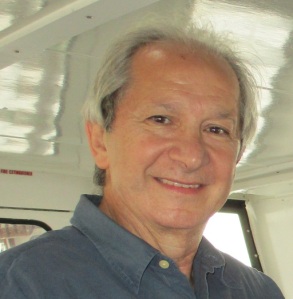 Tiziano Thomas Dossena was born in Milan in 1952. He grew up in an artistic and inspiring environment and began writing at a young age. He moved to the United States at sixteen and completed his studies in America. The author lives in Colonial Heights, NY.

He returned to Italy in 1978 to study medicine. The same year, he received the third prize for sculpture at the “Biennale di Boniprati;” additional awards and nominations were won on in the following years, for poetry, journalism, and fiction. Among those worth noting, the first prize for essays at the “De Finibus Terrae” contest; the second prize for poetry at “Voci Nostre;” the first prize for fiction “Coppa del Mare” at the “Premio Città di Modica;” the second prize for poetry at “Noi e gli Altri;” the Gold Medal for Journalism at “Premio Emigrazione;” the second prize with a silver medal at the “Premio Europa” for fiction. His works have appeared in more than 100 magazines and anthologies in Italy, France, Greece, Switzerland, India, Canada, and the United States.

Dossena was a staff editor of the magazine USA Bridge Apulia (Lecce), and he is currently the Editorial Director of L’Idea Magazine (Brooklyn, New York) since 1990, and founder and Editor-in-Chief of OperaMyLove and OperaAmorMio magazines. He also has a blog on 8 BQE Media magazines where some of his book reviews and interviews appear.

He is the editor of various books, both in Italian and English, published by Idea Press, and is also a translator of all informational text and of the librettos in the music books by the same publisher. These music books are historical, never been published before, and present a unique occasion to the public to access this newly found information and marvelous vocal scores.

His work as an editor and publisher at Idea Press, and his articles on Italian traditions, art, and music as well as his articles on Italian Americans, are aimed at divulging to the greater public the importance of Italians in the American society as much as to focus on the difficulties Italians had to face and overcome to be part of this great nation.

In 2014, he was awarded the “Italian American Personality of the Year” award by the Associazione Culturale Pugliese Maria SS Addolorata in Brooklyn, for “his selfless devotion to inform the Italian American community and diffuse the Italian culture in the USA through his many activities with his magazine, his blogs on opera and literature and his books.”

IIn 2019, he was awarded the Order of the Sons of Italy Literary Award.

In 2021, he received the Lifetime Achievement Award from the Italian Charities of America, for his tireless and lifelong dedication in documenting and highlighting through his work the richness of Italian culture and heritage for present and future generations.