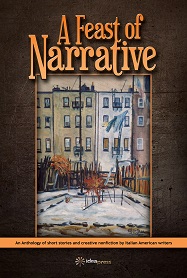 A Feast of Narrative VOLUME 1

This collection of short stories is aimed at presenting the richness of styles and creativity of Italian American writers. It consists of two sections for a total of twenty-three short stories, eight of them nonfiction and fifteen of them fiction, and eighteen authors.

In the fiction section, the opening story by Michael Cutillo, “All aboard the 6:15 for Baltimore,” uses the game of baseball to show how perseverance and family bonds may bring to fruition any dreams, maybe even with the unseen help of a Guardian Angel? It’s a marvelous story that will capture the readers’ attention and heart.

Mike Fiorito’s two stories, “Roller Royce” and “Dancing without Souls” consider the internal turmoil of a teenager who is looking for a ‘good time’ desperately and discover his own proclivities and faults while building up his social skills. An interesting look at teenagers’ life.

J. A. Forgione’s “September 11” is an insightful view of the doubts and soul tribulations of a woman who decides to see an old boyfriend after 40 years. The realization of her own past repeated mistakes and their possible cause is just one of the many psychological aspects that the writer masterfully examines through the thinking process of the character.

Keeping on the theme, “Palermo Revisited,” a story by Maria Lisella, examines the internal sufferings and soul searching of a woman who encounters the son of her ex-fiancée upon his personal request, made after a thirty years hiatus in their communication. Meeting the young man brings confusing and tempting sensations to Emma, the troubled journalist who is revisiting Palermo only for a second time in thirty years, and will test her spiritual endurance while at the same time bring some clarity in her mind about her feelings.

Laura DiLiberto Klinkon’s “Villa San Bastiano” is an intriguing internal monologue by Giacomo, a 32 year old Sicilian who has missed the opportunity to complete his university studies because of family issues and feels trapped in his small town’s trivial world. Just as the unnamed character in “September 11,” Giacomo realizes that there are flaws in his past thinking process and the subsequent actions based on such thinking, and he attempts to find a solution to the apparent spiritual stalemate he found himself in.

LindaAnn LoSchiavo appears with three stories. “A Walk on Cemetery Hill” puts to test the sense of reality of the readers by presenting an encounter with a dead person that changes the main character’s life, while “A Gaijin Among the Geishas” touches a very contemporary topic, transsexuality and one’s acceptance of his or her own new sexual identification. Ms. LoSchiavo addresses the subject with honesty and sensitivity, making this story a salient piece de resistance in her vast portfolio of short stories. Her last story, “The Gospel According to Saint Marks Place” shows how a simple kind gesture may turn the humor of a person around and change a relationship. The superb construction of the characters’ speech with their Eastern European accents and expressions will help the readers feel as if they were witnessing themselves the event in the story.

“An Ocean View,” by Andrew Mele, is a touching account of a man’s recollections of his past fifty years with his remarkable wife and the excellent Inn which has been so much part of their journey together; this story is full of longing, tenderness, and sensibility.

Revisiting the old neighborhood may bring some nostalgia for the bygone days, but it certainly may bring back the reality of those years, with the brash attitude of some of the neighbors, the nosiness of others and so forth, proving that maybe the good ole days were not so good after all. That is the topic of Marianna Randazzo’s “Mary and Martha,” a story with which many readers will find a commonality.

Tim Tomlinson’s stories both have the same main character, a seven-year-old Italian American boy who looks at the adult world with his innocent eyes and draws his own conclusions. In “The Quiet Mouse Gets the Cheese” he learns of the importance of staying silent about things that do not concern him, while in the second one, “You Understand Me,” he finds himself in a struggle with his own Italian roots when his Anglo American father bashes his wife’s family’s habits and calls them Italians Guineas. Both stories offer a very intriguing look at ethnic conflicts with a comedic style that includes a well-versed use of the slang and of the customs of Italian families in America.

Leo Vadalà’s “Fredo” touches subjects dear to many: the death of a child, the love for a dog, the symbiotic relationship between a dog and a child, the difficulty of dealing with people who do not bend rules or believe rules are written in stone, the pettiness that may destroy a faith. Mr. Vadalà does that at times with tact, at times approaching head-on and telling it as it is without hesitation; the result is optimal and satisfying. You may not agree with the main character’s decisions or beliefs, but the readers will root for him and may feel a closeness to his feelings that will surprise them.

“Taking Care of Business,” a story by Elizabeth Vallone a little reminiscent of O’Henry in its structural elaboration, takes place within the framework of the challenging life of an Hispanic household and focuses on the questions that people with a low income and a large family nucleus ask themselves, the compromises they have to take and the possible derailments that may occur in their planning. It’s a genuine pleasure to read this story and follow the characters’ reasoning and the surprising developments.

In the nonfiction section, Margaret Franceschini’s “Time in a Mirror” examines the feelings connected with the loss of her mother and what heritage really means to her. Gilda Battaglia Rorro Baldassari presents two different aspects of her life. The first, depicted in “Handouts,” is an amusing recollection of a misunderstanding that occurred in her years of professional life. The second story addresses a much more serious subject, depicting her Civil Rights Era’s rebellion attempt that somehow fizzled. Both stories are told in an immediate and powerful style.

In “Julia,” Maria Dellaventura reconstructs the life steps of a woman starting with her youthful years while describing her spiritual growth. It’s a refreshing tale of success of an everyday woman. “Boundless” by Mary Rorro narrates the poignant story of a double amputee Veteran of War who reconnects with the nurse who took care of him at the time of the almost fatal occurrence, while Maria Teresa De Donato’s “Living abroad and being an Alien” is a description of the internal conflicts and humorous situations that arise with most immigrants, that is Aliens for the government. The author blended serious and facetious concepts and situations, obtaining a wonderful effect and delivering her thoughts on the topic very clearly at the same time. Sylvana Swinburne”s Johanna’s Sacrifice, a moving family episode, brings a note of nostalgia and pride to the section. Brother Marco Bulgarelli’s “A Vocation Within a Vocation,” an honest and direct evaluation of a person’s vocations, completes the collection.

Altogether, the stories that appear in this anthology explore different topics, some of them typical of the Italian American world, while others universal, offering a gamut of styles and approaches to writing that proves the existence of a vast group of Italian American writers who deserve recognition for their work.