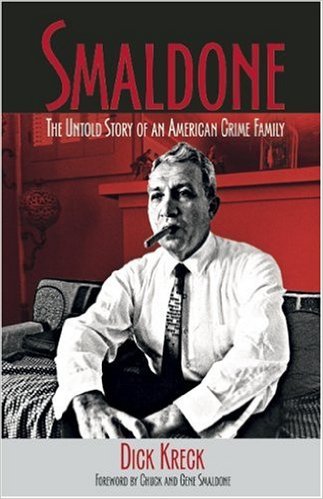 Smaldone: The Untold Story of an American Crime Family

After seeing the title “Smaldone, The Untold Story of an American Crime Family,” I had expectations regarding its contents that left me surprisingly disappointed after reading the book. I expected to read about the story of an American Crime Family, with all its idiosyncrasies and oddities, a story that would capture my attention and that would add some knowledge about its workings while entertaining me with possibly “juicy” details about their activities.

Well, I can’t deny that Dick Kreck, the author, performed a pretty thorough job in assembling data regarding the Smaldone family, but what transpired is a two-dimensional description of their life, with little or no passion infused in the characters or the descriptions of the events. The Smaldones appear to be mild, lower middle class Americans who chose their profession by default, as most Americans did at the time (Depression Era), ‘the job was there, I took it’ kind of decision. The main characters lack the credibility of a mobster figure, assuming instead the appearance of small-time merchants who were casually involved with a life of crimes. Neither are they Robin Hoods or fiends, and their lives’ events are described in such a ‘dry’ manner to make them appear as third-page newspaper column material, listing such occurrences without much passion or involvement.

Used as I was to reading powerful books about the Mob, such as “For the Sins of my Father” by Albert DeMeo, in which not only the characters come alive but you get goose bumps at every page, or by Tony Napoli, or “My Father, My Don,” by Tony Napoli, where you get sucked in by the potent bond between father and son as much as by the intricate stories narrated in it, Smaldone was a true disappointment.

I believe, though, that it is impeccably researched and structured and its faults lie in the apparent attempt by the writer to please the remaining members of the family and portray a “smoother,” version of the facts. In doing so, the characters flatten out and lose their attractiveness, making the essence of the book an academic attempt without emotional engagement.

If the reader is looking for information on Colorado and the mobster families during the Prohibition Era, the book may turn out to be interesting, but don’t look for any thrills; it’s not going to happen.