In Manhattan’s luxurious West Side there is a square dedicated to the famous Italian composer, Giuseppe Verdi. A small green area surrounds his statue and those of four characters from his operas.
The ups and downs of the place from the end of the 18th century to the present day

Starting from Times Square and the Theater District, going north along the mesmerizing Broadway, you will come upon a succession of marvelous and unexpected landscape enclaves. One of them is Dante Square, a tranquil corner wedged amongst the hustling and bustling of the Lincoln Center Plaza. Further uptown, at 72nd Street, you are going to encounter another welcoming corner, one of New York’s smallest parks, Verdi Square. Do not let the lesser size deceive you: this park has a very remarkable history.

Embraced gently by the surrounding buildings, the area was in earlier times a part of the old village of Harsenville, a fashionable locality for summer villas in the late 18th and early 19th centuries. The old Bloomingdale Road changed with time into Broadway and the village was absorbed by the City.

At the beginning of the 20th century, Carlo Barsotti, editor of Il Progresso Italo-Americano, started a collection amongst his newspaper’s readers for the installation of a monument dedicated to Giuseppe Verdi in this particular area. It was not his first effort, since he had successfully championed the acquisition and installation of two other statues, those of Christopher Columbus and Giuseppe Garibaldi. Triumphant once more, Barsotti obtained the funds for his project and immediately heralded an International Contest for the selection of the artist. The winner was a little known Sicilian sculptor, Pasquale Civiletti Suteri, who completed the work in 1906. The handsome Carrara marble and Montechiaro limestone monument was placed in the square before 10,000 exultant people, numerous marching bands and a chorus of 300 children.

The memorial, comprised of a statue of Giuseppe Verdi standing upon a base which parades four statuary characters from Verdi’s operas: Leonora of La forza del destino, Falstaff, Aida and Othello, faces a triangle of land enclosed by a metal railing.

Just like many other famous locales in the Big Apple, Verdi Square has had a checkered history. Just two years before the placement of the operatic genius’ statue, the celebrated Ansonia Hotel was built just across Broadway, soon becoming the favorite New York abode of musical legends such as Enrico Caruso, Arturo Toscanini and Igor Stravinsky. In the years that followed, these influential personalities frequently used to stroll through this park, as did the Gershwin brothers, who lived nearby. Verdi Square had become an open-air lounge for musicians.

As the years went by, the Square started leading a double life, as the New York Times affirmed: “By day, an outdoor community center for West Side residents; by night, a refuge for drug dealers and homeless people”. Then, a dramatic movie with Al Pacino, Panic in Needle Park, rendered the park infamous by showing the kind of shady individuals who were making this place their home. This occurred even though Verdi Square was selected, in 1974, as a Scenic Landmark by the Landmark Preservation Commission, one of just nine public parks to be assigned this distinction. The many attempts by the City to keep the area clean of drifters did not seem to make a dent and the Square became also known as “Vermin Square”, also because of the large numbers of pigeons by day and rats by night which inhabited the park. This went on until the 90s, when the City started to experience a new renaissance, and just like magic (but also through the many efforts of various individuals and associations) Verdi Square was reborn and became the little Eden as we know it today.

Today, the park is one of New York’s most known recreational areas, with an annual music festival which attracts performers from all over the world; Verdi Square’s Festival of the Arts.

The floodlighting of the monument, completed in 2010, added new life and a tinge of extra charm to the statue of this musical legend. In the meanwhile, the Festival – a series of three free afternoon concerts which introduces young talents to the wider public – is making sure that, faithful to the memory of Verdi, the music goes on… 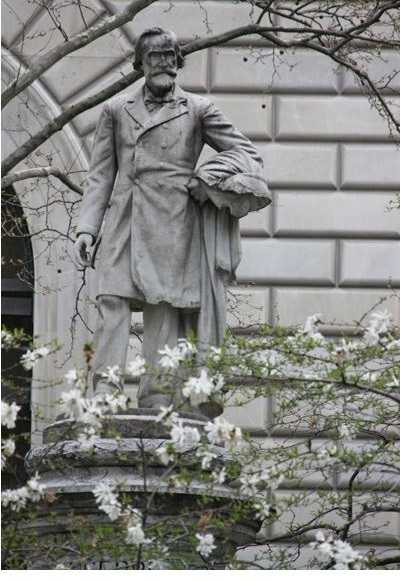 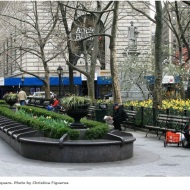 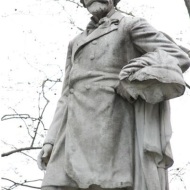 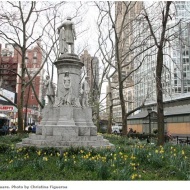