The artist’s paintings on display in New York next to the photos from which they were taken. The photographic sets were mounted with impeccable attention to the details.
His extraordinary capacity to render the atmosphere of an epoch. His commitment to civil rights behind an apparent naivety

I live in Crestwood, an idyllic neighborhood in the city of Yonkers, which is just north of the Bronx. Here, many years ago, Norman Rockwell, (New York, 1894 – Stockbridge, Massachusetts, 1978)  the great American artist, had chosen to depict the local train station in one of his magnificent paintings (Commuters, 1946). When I saw it for the first time I realized why he had become an icon in the American art world. The painting was “alive” in all senses. Not only were the images carefully studied and replicated, but the overall feeling of the composition conveyed the mood, the characteristics of that community at that time, or at least it gave the impression of doing so. I admired his work without realizing what it really entailed. 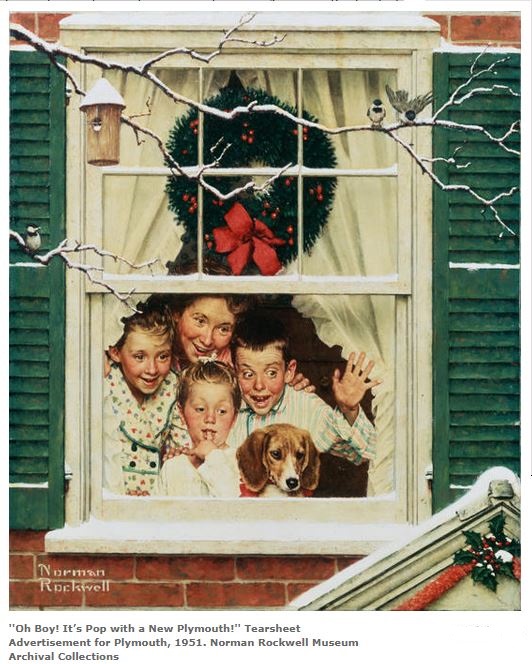 It took a visit to the exhibition Norman Rockwell: Behind the Camera (one of Norman Rockwell Museum’s traveling exhibition, on until April 10th at the Brooklyn Museum) to open up a new world to me about his painting techniques and his deeply professional artistic approach to reality as he chose to reproduce it.

I always knew he used models for his paintings, but never realized that he staged their positions, photographed them and then painted them, always retaining the original idea, but adding his own particular twist to the images. He used these photographs as building blocks for his compositions, allowing him to develop flawless images which have enhanced and beautified the covers of many popular American magazines and advertisements for almost 60 years. In the exhibition, organized by the Norman Rockwell Museum, some of the artist’s photographs (spanning from the early ‘40s to the late ‘60s) are placed alongside his paintings, drawings, and commercial illustrations to enlighten us about the working process of one of America’s most beloved artists. 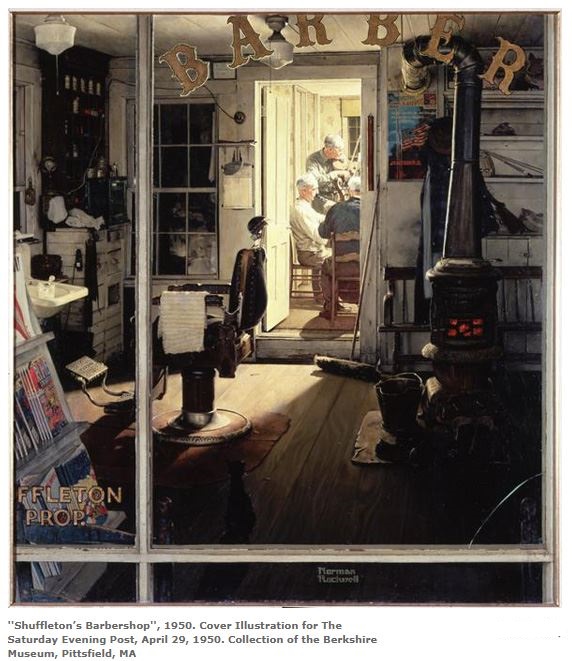 A superlative narrator of the American way of life through his popular illustrations, Norman Rockwell stood for what is right in American life even when he portrayed scenes that depicted controversial situations such as struggles for civil rights, the war on poverty and discrimination.

Rockwell, unlike Walter Molino in Italy, aimed at something more than to illustrate an episode or an attribute of the society of which he was such an outstanding member. He may have been appearing to recreate endearing and adorable images of little girls dealing with approaching adulthood, boys’ exchanges with bullies and children’s escapades. His illustrations or paintings, which always brought a smile to the face of the viewer, clearly give the first impression of having been just simply created for the visual enjoyment of the readers. Observing his work, though, we may notice two major tendencies developing through the years. The first is the complexity of the pictures, which tended to acquire more and more details, and the second is the depth of the message that came with the image. His details allow for an educational experience about the specific decade in which the painting was produced. Nothing is left to chance. The clothing, the gadgets, the cars, the houses and all the particulars that pervade his creations are true to life and reflect his exactness. In the painting New Kids in the Neighborhood(1967), for example, the cat that the little black girl is holding in her hands is white, while the puppy alongside the white kids is black, a silent comment on the unimportance of color, and both the black boy and the white one carry baseball gloves, a common bond that will allow for the overcoming of prejudice.

Moreover, Rockwell also stood for an America free of the bigotry, discrimination and racism which had characterized it throughout his lifetime. He expressed what the common decent citizen of that country felt and was sometimes too timorous to articulate: America was a beautiful country, but changes had to come, as they eventually did. He was criticized at first for his adamant pro-civil rights stand and his portrayals of delicate situations aimed at awakening the American fairness, in which he undoubtedly believed. However, even that criticism could not damage his powerful and undisputed artistic reputation.

His art was more than messages about the rights of the underprivileged. The America one may see and appreciate through his magnificent art work is a sanguine, true to itself, sometimes slightly kitsch but always fascinating, intriguing and unique America, the land of liberty, Coca Cola, skyscrapers and the bald eagle, the land of Norman Rockwell. That is why, even today, as I pass by Crestwood station, I can’t help but smile, reliving that image in my mind as if it was the first time. 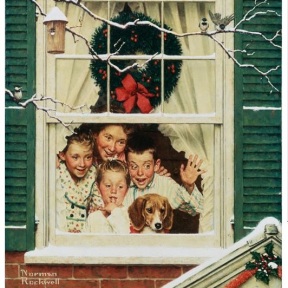 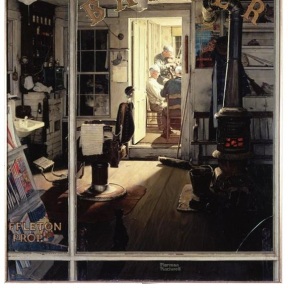 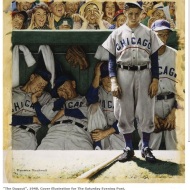 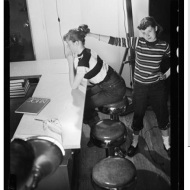 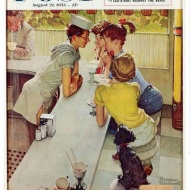 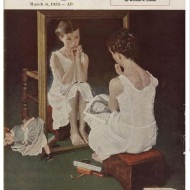 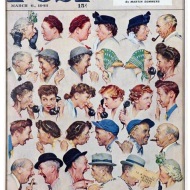