Since the end of 2013 two impressive new statues stand in Bryant Park, in the heart of Manhattan.
Their creator is the Apulian designer and architect Antonio Pio Saracino, who has been living in the Big Apple for ten years

New York. Avenue of the Americas. “Superhero”, one of the two magnificent, permanent installations by Antonio Pio Saracino

Continuing on our stroll through New York City’s ever-so-alive streets in search of more Italian sculptures, I was astounded to discover that two new ones have been placed in a strategic area of the city, Bryant Park. Well, actually, the two statues stand proudly at the north and south ends of the public plaza at 1095 Avenue of the Americas, between 41st and 42nd Streets, just half a block from Bryant Park, the second largest park in the city. The park, originally named Reservoir Park, stands behind the marvelous Beaux-Arts building of the New York Public Library’s central branch, and after years of neglect has become a paradise in one of the city’s most sought-after neighborhoods. The splendid gardens host restaurant pavilions, concession kiosks, an ice-skating rink, a carousel, six monuments and a memorial fountain, making it a must-visit location in New York City.

Finding two “Italian” statues in the vicinity of the park was definitely a pleasant surprise. The creative genius behind “The Guardians: Hero and Superhero”, these two 13-foot-high digitally generated architectural compositions, is the Apulian architect and designer Antonio Pio Saracino. Born in San Marco in Lamis, near Foggia, he came to live in New York 10 years ago, conquering the city with his creative talent. Today at the age of only 37, he has achieved the remarkable feat of having two of his statues erected in the heart of Manhattan.

“Hero” is an 8,000-pound marble reinterpretation of Michelangelo’s David, Florence’s most famous statue and its symbolic defender, standing for Italian character, or Italian-ness. As a matter of fact, the stacked, incandescent white marble slates that form this flowing and aerial vision of the artist came from the largest quarry in the world, located in Danby, Vermont, whose general manager and owner come from Carrara (Italy), as do many of its workers and much of its equipment. The slates were then brought to New York’s ABC Stone company to be cut and assembled as per the instructions given by Saracino, who was assisted by structural engineers from the New York-based Experion Design Group.

The “Hero” was donated to the USA, with the support of Eni Corporation, by the Italian Ministry of Foreign Affairs, the Embassy of Italy in Washington, D.C., and the Consulate General of Italy in New York, as a symbol of Italy on the occasion of the Year of Italian Culture in the U.S. (2013). The ambassador of Italy to the United States, Claudio Bisogniero, stated: “David: such a strong symbol of Italian cultural heritage, and now a Guardian of the friendship between our two countries. The Year of Italian Culture in the U.S. couldn’t have left a better legacy”. Saracino, interviewed on the day of the installation in the plaza, declared: “I was asked by the Italian Embassy to look at Michelangelo’s David for inspiration. Clearly such a momentous reference was daunting. Yet I was so proud to be able to create a symbol that could represent a gift from my native Italy to New York, that I accepted the extraordinary challenge”.

“Superhero” is a 15,000-pound stainless steel statue, a project commissioned by Equity Office, the company whose headquarters is at 1095 Avenue of the Americas. Its system of repeated planes of polished stainless steel is identical to the one used for the “Hero”, and the choice of material for the representation of the typical comics “superhero”, faithfully garbed with a cape, is impeccable.

Together, the Guardians exemplify two symbolic protectors of New York City and celebrate the superhuman and the inspiration that it channels. Offering an everlasting message of strength, resistance and progress, as Saracino himself said: “The two anthropomorphic layered architectural constructions display the universal ability of mankind to cement its own presence in the world with its perennial construction skills”.

Curator Helen Varola declared: “Together, the Guardians’ surveillance suggests a vulnerability spanning centuries, politics, and cultures; a space-time dialogue that radiates a contemporary sacra conversazione with the island of Manhattan. The stacked planar marble and stainless steel forms are layered as vertical columns to create positive/negative spaces through which we view Manhattan’s energy and architecture recalling the way Donald Judd’s ‘stacks’ evoke mystery and sensuality”.

Installed at the end of November 2013, the statues have immediately become an obligatory stop for tourist excursions and are appreciated by the visitors for their elegance and their modern approach. There’s no doubt that their presence helps to promote the image of Italy in New York City. Their creator commented: “One of my biggest dreams has become reality; it’s an incredible honor to represent your country in the heart of the world”. 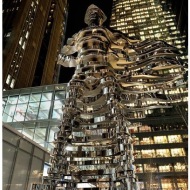