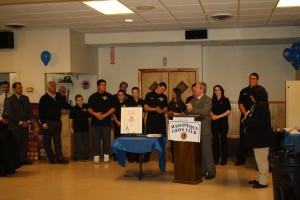 It has been a trying time for New Yorkers. A “perfect storm” was not anything they were accustomed to or prepared for, and it shows. The damage is extensive and it will take years for some areas to reshape themselves to what they were pre-hurricane. Some will never be the same. It’s therefore in that state of mind that the Massapequa Lions met to inaugurate the Massapequa Alpha Leos Club.
It could have been just another one of many functions that occur in the NYC metropolitan area, but it wasn’t. It was special, unique, historical and yes, it brought a smile even to the many members present who had recently lost their house.
How could that be possible? Simple; the formation of an Alpha Leos Club, a group of young people who decided to join the Lions to help their community, brought a sense of hope and serenity among these tried individuals who decided to meet even under these dire circumstances. Among the present there were three local officials: the Honorable John Venditto, Town of Oyster Bay Supervisor, Joseph Saladino, NYS Assemblyman, and Michael Venditto, County Legislator.
The timing was perfect as well as the storm was. There was need for help, a lot of it, and these youngsters (age 12-18) were ready to jump in the game and play it all the way. They already had started few days before the inauguration, helping assembling a distribution center in their town, which was created in Massapequa to serve Oyster Bay Township, thanks to the vitality of the Massapequa Lions president, Sue Piccolo. They moved and put on display a variety of goods, such as food, clothing, cleaning supplies and blankets, which had arrived to New York thanks to the generosity of the common citizens of Spring, Texas, and the hard work of retired Detective Victoria Thompkins.
One of the Leos, a sixteen years old girl, was sick but still present and helping. It was a pleasure to see these youngsters sweat it out for their neighbors and co-citizens without a bit of complaint or a necessity for older people to direct them. They seemed to have been in this kind of business their whole life.
The passion for helping others, which has been the cornerstone of the Lions International since its foundation, was evident in their actions and gave them a seemingly never-ending amount of energy.
Their inauguration, therefore, was not a simple function, but the acknowledgment of a group of young people who decided that, to make a better world, it was not enough to talk about it. They are ray of hope for our community and we hope others will follow.