An interview by Tiziano Thomas Dossena

I recently read a wonderful historical fiction book that I thoroughly enjoyed and I tried to convey in my review my enthusiasm for the choices the writers had taken in compiling this brilliant story of love and passion, greed and faith, and most of all history. History not as a series of dates and events as often taught in our early school years, though, but as acts of fervor and commitment to the cause of liberty versus the everlasting powers of the uncaring privileged who don’t want to let go of their advantages. That book, The Secret Price of History, has left such a deep impression on me that I felt I wanted to discover more about the authors and this book. Here, then, follows an interview with Gayle Ridinger and Paolo Pochettino.

Tiziano Thomas Dossena: Gayle, you are American and you have been awarded the National Translation Prize from the Italian Ministry of Culture in 1997 and were named Knight of the Star Order of Italian Solidarity by Italian President Carlo Azeglio Ciampi in 2003. Notwithstanding the considerable importance of such awards, this shows you have a deep and longstanding interest in Italian and Italy. When was this interest born and how?
Gayle Ridinger: I have always enjoyed spending time with relatives, both those of German origin on my father’s side and those Italian on my mother’s side from near Avellino. Only one factor ever got in the way of our visits, and we learned very early how to call it by its name: Bell Labs—which is to say the research arm of AT&T for which my father worked as an engineer. My mother in her phone calls kept up on the latest family gossip, which she then shared with us , and we children soon got used to making and losing friends as the company moved us around the East coast and Midwest—our things, furniture, and plants safe in the huge moving trucks.
You might say that when I was a young teenager it was Italy that came to me and not the other way around. Certainly, when I enrolled in college (I went to Oberlin), it seemed natural that alongside my studies as an English major I should also want to explore Italian and its poetry.

Tiziano Thomas Dossena: You also wrote a children’s book, A Star at the Bottom of the Sea, which was translated and published in many languages. Could you tell me something about it?
Gayle Ridinger: Willingly! The illustrated story featuring Starfish was actually invented in part by my daughter Olivia, then age 8. She was the one who understood that Starfish would get bored by a life up in the sky, among stars stuck forever in one constellation, and need to be with her friends in the sea again.

Tiziano Thomas Dossena: I understand that you now live in Milan with your husband, and co writer of The Secret Price of History, Paolo Pochettino. I see that your father’s family is from Gettysburg and you spent many summers in that area, generating a fascination in the Civil War period, while Paolo has always been interested in the Italian Risorgimento, almost completely contemporary historical events. Is it the discovery of these captivations of yours that triggered your decision to write this book together?
Gayle Ridinger: Actually what happened was that one day during my summer vacation at my parents’ house in the States, I got an email from Paolo in Italy (whom I’d met only a few months before), in which he launched the idea of writing a novel together—with as main character a young Italian-American journalist who decides to write a feature article on the Italians who fought in the American Civil War. Although in the final version our Angie Cebrelli became a TV weather girl, some things are still the same; above all, there is still the old family suitcase full of curious objects, including a medallion connected with a treasure.
A thriller, I thought, as I listened to Paolo that summer. I was intrigued. And I liked the idea of a novel concerning Italians and Americans that wasn’t, say, about another retired couple who moved to Tuscany to try their hand at wine-tasting. Paolo and I talked about a double-plot providing a mix of the entertaining and the very serious (or tragic…or evil). As for the historical story line, we were drawn to the second half of the 1800s. Paolo had always been keenly interested in the Risorgimento—the three not always easy-to-follow Italian wars for unification extending from 1848 to 1870. As for me, what with my father’s family being from Gettysburg, I had always been very much caught up in the pathos of that important battle. The fact that the Risorgimento and the American Civil War overlapped in time inspired me even before I learned that Lincoln asked Giuseppe Garibaldi to be one of the commanders of the Union Army. 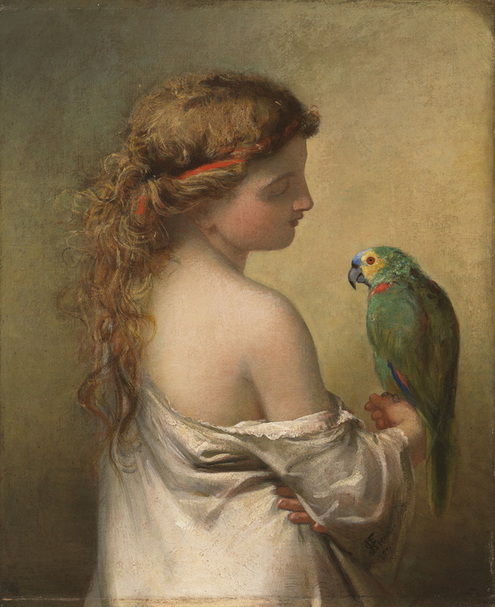 James E. Freeman – The Princess Prattles to Her Parrot, 1871, Oil on canvas. Private collection.  Courtesy of John and Mary McGuigan

There are Americans in our book with famous names, like Margaret Fuller, but also others who still today don’t get the attention they deserve. A case in point is James E. Freeman, painter and acting American consul, who was such a fearless supporter of Italian unification that he wrote dozens of safe-conduct passes for fleeing Italian patriots in Rome. Another case bearing attention is that of Francesco Secchi De Casali from Piacenza, promoter of farmland for Italian immigrates to southern New Jersey, editor of L’Eco d’Italia, the first Italian language newspaper in America, and the organizer and sponsor of the first (Italian) schools for children who would otherwise have no choice but to be rag sellers at the 5 points of Manhattan.

Tiziano Thomas Dossena: How did you write The Secret Price of History? Was it a four-handed job or were the chapters more compartmentalized based on your interests and personal knowledge?
Gayle Ridinger: Yes, this is a book written a quattro mani—by two people, and readers may be wondering how we managed that. It went very well, actually. Although the final version of everything was written by me in English, Paolo was the imaginator—l’immaginatore—of much of THE SECRET PRICE OF HISTORY. But I claim as mind (farina del mio sacco) the chapters on the Battle of Gettysburg, alluding as they do to a courageous female ancestor of mine.
One final tidbit regarding our novel that we love to share regards Montiglio Monferrato in Piedmont. This lovely hilltop town, with a castle from which the Marquis of Monferrat ruled for centuries, is the setting for several of our modern-day chapters. It was normal that we would want to visit the town in person, and so we did one weekend. The only problem was that our little car didn’t want to budge again after we had finished, and it was only thanks to the friendly villagers that we ever made it back to Milan that day. It was the start of a special friendship with the people and the place that led us to choose to get married there in 2014. 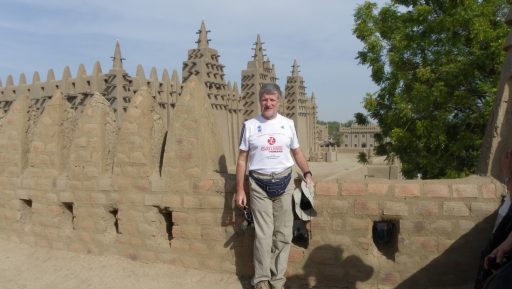 Tiziano Thomas Dossena: Paolo, you traveled a lot, biking in the Himalayan Mountains and surviving revolts both in Sudan and Yemen. Very different experiences, I’d say… And you also survived an airplane hijacking. Which one of the three incidents was the scariest and why?
Paolo Pochettino: In reality it was a fourth event that was the most frightening. In 2012 I was on a hiking tour in Mali. Halfway through this trip we learned that the first batch of Islamic terrorists to go into action that day had kidnapped two tourists and killed a third, whom we had met the day before. That night we camped in the middle of nowhere; I remember it grew very dark, and then all of a sudden we heard the sound of two pick-up trucks coming out of the desert towards us. We were sure they wanted to kidnap us, but instead they left us alone and the next morning we learned that the only reason they’d come was to pick up a load of onions.
Meno male!

Tiziano Thomas Dossena: You are a mechanical engineer and an avid fan of cinema. How did you, with this type of background, end up co-writing an historical fiction book?
Paolo Pochettino: I am very fortunate to have the diaries of both my grandfather and my great grandfather on my father’s side.  Reading these eye-straining pages, I found I wanted to learn more about the history of my family as well as about the historical events they lived through. Realizing that many of these events are little known to most, I felt overtaken by an immense desired to write about them.

Tiziano Thomas Dossena: I am sure the book required a lot of research. Did you physically visit all the sites that you mention in the book?
Paolo Pochettino: Yes, it did require a lot of research, 5 years worth, which we really enjoyed. We visited archives, museums, historical sites, ruins of the Mithraism cult both in Rome and in Ostia Antica, the underground wine cellars from the 1600s carved out of chalk—called infernot; and the casane (fortified houses in Asti that evolved into Lombard proto-banks); all of these were places that we had gone to see and now wanted our characters to do the same. Indeed, we took full advantage of the fact that the places we were visiting were those of gastronomic excellence. In our novel we mention where various dishes come from, and include a recipe at the end for the special ravioli (agnolotti) important in the cuisine of northern Italy, that I remember from my childhood. 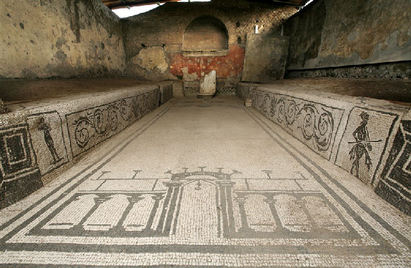 Tiziano Thomas Dossena: Which one is the character in the book that you feel you like the most and why?
Paolo Pochettino: Goffredo. He represents the unknown patriots that fought for many years your freedom. Everybody has heard about Garibaldi’s Thousand. There were one thousand of them at the beginning. At the end there were 31,000 of them coming from every part of the world. There were very few documents to tell us about these— 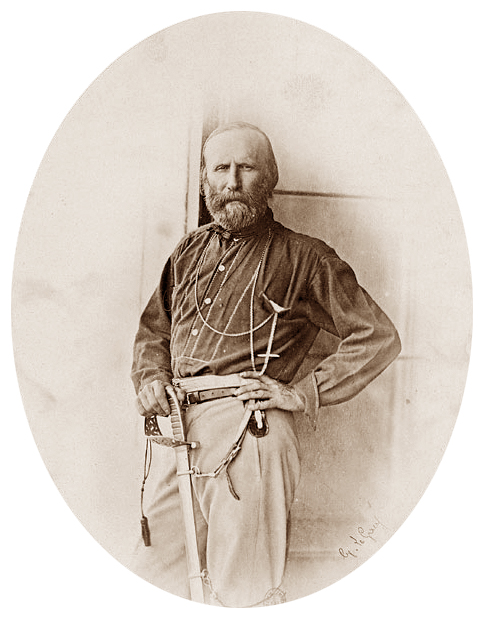 Tiziano Thomas Dossena: Two of the characters in The Secret Price of History are Giuseppe Garibaldi, the Hero of the Two Worlds, and Antonio Meucci, the inventor of the telephone. You dedicate a good portion of the book to them. I know that you presented your book at the Garibaldi-Meucci Museum, which is situated in the house in which Meucci lived in Staten Island and in which Garibaldi also lived for a while. What was the feeling you had when you performed this presentation at the location that you so well describe in the book?

Gayle Ridinger: It was very inspiring to be there. The day itself, on the other hand, was tragic. We learned that there was a police block on Staten Island, and a Staten Island resident had died. Only 2 or 3 people were able to attend the reading.

Tiziano Thomas Dossena: Do you have any new projects at work for the near future? {same as above}
Paolo Pochettino: I want to complete the book about my family. I am happy to say that my relatives have turned out to be very interesting. I have discovered patriots, sailors, corsairs, fascists and antifascists, rebels, and opera singers. Nobody in the family knew about them. I want to make them come alive to whoever reads about them.
And I would also like to write something about my travels.

Gayle Ridinger: I recently published a book of short stories, The Prose of Other People’s Lives, and now my main concern is another:
I feel a bit silly saying this but this is the truth: I HAVE TO LEARN HOW TO STEAL BACK TIME

Tiziano Thomas Dossena: Any words for our readers?
Paolo Pochettino: Don’t forget your history.
Gayle Ridinger:  Affection and friendship remain as flames in our life.