I had met him a couple of times in the corridors of Madison Square Garden and noticed the name on his great Chef uniform. I had heard that he was a Chef of great reputation and that intimidated me a little. I dared to talk to him the day I entered his kitchen for technical reasons. We discovered the commonality of the language and immediately formed a pact of spontaneous and natural friendship between Italian emigrants abroad. A few days later he warned me of his intention to move to the Baccarat Hotel, a prestigious restaurant in central Manhattan. I explained to him that there was a magazine (Christopher) that spoke of the Italians who had been successful abroad and he promptly consented to this interview. This is a translation of that interview.

Tiziano Thomas Dossena: Patrizio, you started your culinary adventure back in 2000 in various trattorias and restaurants, in Puglia. How did your passion for cooking come about?
Patrizio La Gioia: I think my inspiration was my mom. I still remember when I played on the floor and saw the table moving like a ship on the waves; (Patrick laughs) I had a lot of imagination as a child, in reality, it was my mother who worked the dough for the pasta. Sunday was a ritual for my mother to make fresh pasta and start with the famous orecchiette. I remember I wanted to learn how to make them but it was really very difficult for me, I was fascinated by how my mom made it look so simple.

Tiziano Thomas Dossena: From there you left  Italy in 2007, becoming Chef de Partie in Monte Carlo at the prestigious La Salier restaurant. How did this change happen? How difficult was the change from an Italian infrastructure to an international one? What did you learn there?
Patrizio La Gioia: Fortunately, the change was not so difficult after all, being an Italian restaurant with Italian staff, and then frankly, in Monte Carlo, Italian is also spoken. Workwise speaking it was quite difficult because I switched from restaurants to a five-star restaurant. I learned the five mother sauces, fresh pasta and much more. 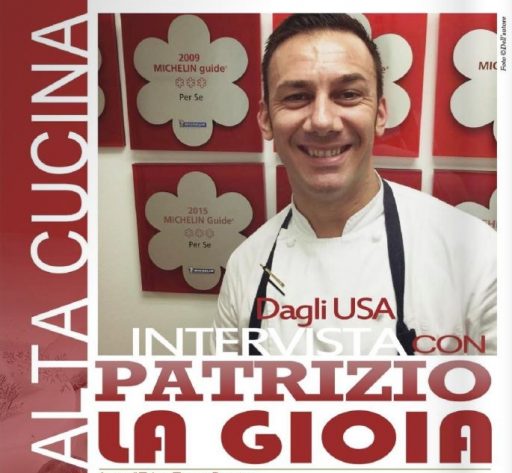 Tiziano Thomas Dossena: The next stop is America, and even Miami, Florida, at the end of that year. How did you get there? In that city you had two experiences as Chef de Partie at a high level; the first at the Hotel Cardozzo and the second at the renowned The Forge Restaurant. What difference did the two experiences have?
Patrizio La Gioia: Through La Salier I managed to get myself transferred to the Cardozzo Hotel in Miami as part of the company. I remember as if it was yesterday the difficulty with the language, the units of measurement, and the culture. I felt completely in another world. After a year at Cardozzo my goal was to work in one of the best restaurants in Miami. I then started working on The Forge, a legend in Miami, under the guidance of the great chef Dewey LoSasso. I remember that year he won as the best chef in Florida on the Miami Times.

Tiziano Thomas Dossena: In Miami, there was another evolution and you worked as Sous Chef in two famous restaurants, one with French cuisine, La Gluttoneire, and one with Italian cuisine, Tiramesu. What different experiences did you have in these two locations?
Patrizio La Gioia: After the experience at The Forge, I started my first experience as a sous chef (second chef) at Tiramesu, a great Italian restaurant, where I learned how to manage the kitchen from a bureaucratic point of view. I learned about food cost, labor cost and how to make purchases. Always very keen on learning other cuisines, I left Tiramesu to embark on this new French experience at Gluttonerie (2012 best French restaurant in Miami).

Tiziano Thomas Dossena: You also studied under the Executive Chef Thomas Buckley in the Nobu restaurant, also in Miami. How would you define this episode of your life?
Patrizio La Gioia: Oh yes, as I said before I always had the passion to learn different cuisines; well, yes, it’s Japanese cuisine at the great Nobu Miami. I remember when Chef Thomas Buckley (corporate Chef Nobu America) made me the proposal to work with him; I was a bit scared of the difference between Italian and Japanese cuisine. He jokingly replied “it’s the same thing!!! You have carpaccio and we have sashimi, you have pasta we have noodles.” It made me understand that cooking is cooking, regardless of cultures.

Tiziano Thomas Dossena: In 2013 you moved to Aspen, Colorado, and worked at the FOOD & WINE Chefs Club. How does this club work? What functions did you have and what did you get from this practice?
Patrizio La Gioia: This was one of the best experiences of my career. Food and Wine Magazine is a New York haute cuisine magazine, which annually awards America’s best new chefs. The concept of the Chef Club is to invite every season 4 best new chef of Food & Wine, and create the menu with their best dishes, And we, as resident chefs, had to replicate them; an unforgettable experience. 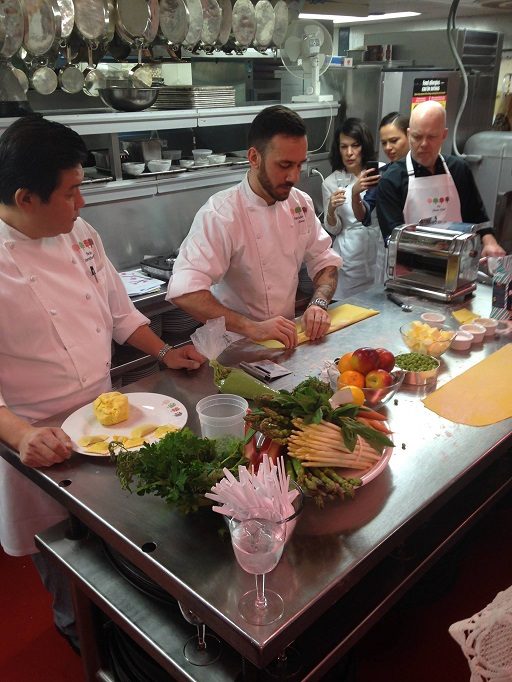 At the Four Season teaching a cooking class…

Tiziano Thomas Dossena: In 2014 we find you in New York, with the Patina Restaurant Group, In this corporation, you had various functions. What were they?
Patrizio La Gioia: My first role with Patina Restaurant Group was as Sous Chef in the restaurant Brasserie 8.5, French restaurant under the command of Franck Deletrain, a great chef, person, and friend. After 6 months with him, the company decided to promote me as Chef De Cuisine at the Naples45 restaurant, an authentic Neapolitan restaurant.

Tiziano Thomas Dossena: Being the Executive Sous Chef at a fabulous and famous restaurant like The Four Seasons Restaurant is the dream of many Chefs, and you would get it in 2015, holding the position until the restaurant closes, a sad episode that fortunately is was recently corrected with its reopening. What were your skills in that function?
Patrizio La Gioia: After some time spent in Naples45 I felt dissatisfied because I was in the big apple with the best restaurants in the world and I was there to make pizzas (not really, Tiziano, but you understand what I mean…). So I decided to go back to doing gastronomic cooking, and I started the adventure at the legendary Four Season Restaurant, knowing already that it had to close after two years. But it didn’t frighten me because I already knew that it would open new doors for me here in Manhattan. The Four Season Restaurant was very famous for the “Power Lunch” or Manhattan’s most powerful people came to lunch, and they often chose the special of the day. One of my tasks was to create three different special dishes every day. 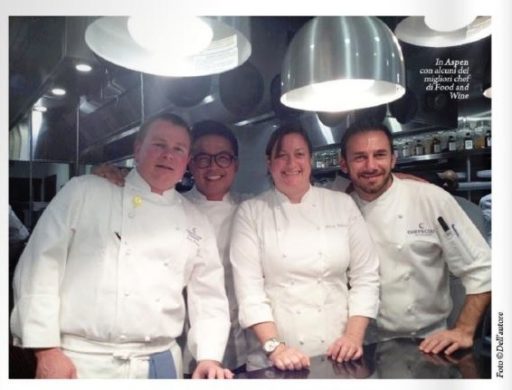 At the FOOD & WINE Chefs Club

Tiziano Thomas Dossena: After The Four Seasons you had another extraordinary opportunity, working with the Illustrious Chef Thomas Keller. What did you learn from him?
Patrizio La Gioia: As I said before, the Four Seasons Restaurant opened its doors to the best restaurants in the world, so I started with 3 Michelin stars “Per Se”, one of America’s best restaurants, if not the best. For me, it was an honor to meet the great Chef and Mentor Thomas Keller. With him, I learned discipline, precision, and excellence.

Tiziano Thomas Dossena: The penultimate stage of your American adventure is the Delta Club of Madison Square Garden, the most exclusive club in that venue, where I met you. What were your functions at the Delta Club?
Patrizio La Gioia: At Madison Square Garden it was a unique experience! Spectacular events, from basketball games, hockey, boxing matches, and of course concerts. I remember the time that Andrea Boccelli came to sing, I was in the kitchen and at a certain point, I recognized the song Nessun Dorma, one of my favorite songs. I went out of the kitchen with goosebumps. At the MSG I was the Chef of the Delta Club, which serves the 20 most important Suites, practically cooking for the VIPs, including the owner Jim Dolan.

Tiziano Thomas Dossena: Now that you’ve become one of the Chefs at the prestigious 5-star “Baccarat Hotel” what other goals do you set yourself?
Patrizio La Gioia: I honestly don’t know where it will take me in the future. Certainly, I know one thing: every choice I make will always be made with the heart, as I have always done. Obviously, like all chefs, my dream is to manage my own restaurant one day. 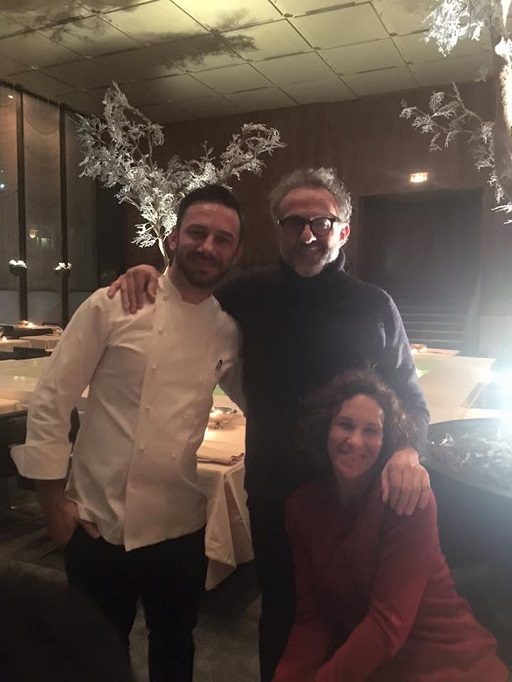 Tiziano Thomas Dossena: In many years as a chef in prestigious locations you will have cooked for actors, singers, and high personalities. Do you have any particular anecdotes?
Patrizio La Gioia: Unfortunately, for privacy reasons I can’t say much, but the only thing I can say is that in my career I cooked for actors, singers, athletes, politicians, princes and princesses, but for me every guest is a VIP, regardless if he is a famous person or not. But I will never forget the time I was in the kitchen and a waiter came into the kitchen and said to me: chef, there is a certain Massimo Bottura who says he is an Italian chef and wants to talk to you. And I, with an irritated tone, shouted to the waiter: “A CERTAIN MASSIMO BOTTURA!!!?????? He is the best chef in the world!!! Ignorant!!”

Tiziano Thomas Dossena: During your career, you have created various specialties. Could you reveal one or two for our readers?
Patrizio La Gioia: As you well know, in Jamaica one of the typical dishes is the oxtail, almost like the coda alla vaccinara, a typical Roman dish, but prepared with different spices. My wife is Jamaican, so one day I was inspired and I created this dish “Pappardelle with rosemary, with oxtail ragout, black cabbage, and Tuscan pecorino”. A colleague of mine nicknamed it the “Rasta Pasta” plate. Since then, my famous Rasta Pasta was born.