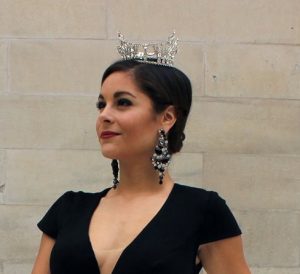 Jamie Lynn Macchia is a 26-year-old Magna Cum Laude graduate of Wagner College with a Bachelor of Science Degree in Arts Administration and Marketing. While in attendance, she was a Competitive Dance Team member, Alpha Omicron Pi sorority sister, and part of the Omicron Delta Kappa National Leadership Honor Society.
When she was 17 years old, Jamie Lynn began competing in the Miss America Organization to obtain scholarships for college. She is the only woman to achieve the Miss Staten Island title twice, in both 2012 & 2014, and is also the former Miss Greater NY 2013 & 2015. In 2014, Jamie Lynn was invited to represent New York in the National Sweetheart Pageant in 2014, a long-standing tradition created in 1941, which is open to runner-ups from the Miss America state pageants. Out of the 43 contestants from across the country, she was named first runner-up – the highest placement ever for New York. In June of 2015, Jamie Lynn won the prestigious title of Miss New York and went on to compete at Miss America in Atlantic City.
Jamie Lynn works with many different organizations, but after loosing her best friend, Dominic, when they were 15 to leukemia, she dedicated her volunteer efforts to her personal platform: Inspiring Action Against Pediatric Cancer.  Alongside the Pediatric Cancer Foundation, Gianna Nicole’s Heart of Hope and The Truth 365, she is a force in making a change to bridge the funding gap, raise money for the necessary research and give our kids a fighting chance.  She campaigns for #MoreThan4 percent, which is the only amount of federal funding for cancer research that is allocated to all childhood cancers. 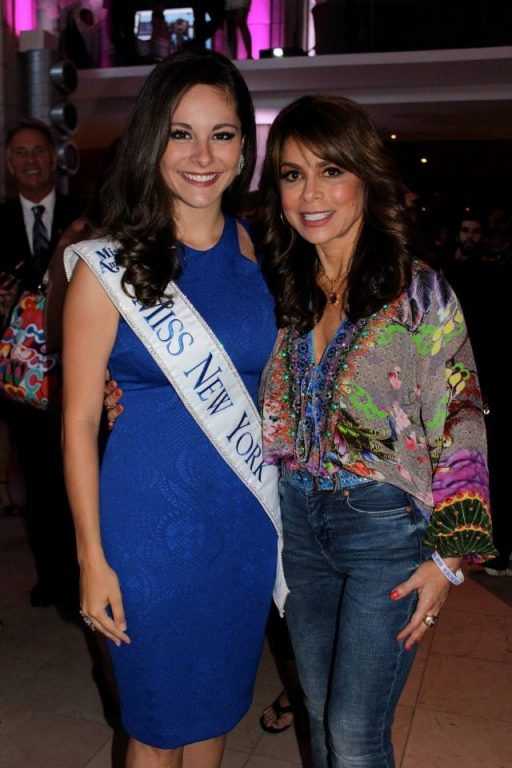 Over the years, Macchia has raised over hundreds of thousands of dollars for various charitable organizations, served as co-chair of the Leukemia & Lymphoma Society’s Light the Night Walk and created and received numerous prestigious awards for her work including: Miss America Organization Community Service Award, Miss America Organization Academic Award, Children’s Miracle Network’s “Miracle Maker”, SIEDC’s “20 Under 40” Award, Star Network’s “Stars Under 40” Award, and the Rotary Club of Verrazano’s “Women & Children’s Award.”
Jamie Lynn now works as the full-time Development Officer for Staten Island University Hospital, Northwell Health and is a consultant for Rodan + Fields. In her free time, she likes to do yoga, travel, go out to eat, and spend time with friends, family, and her cats – Jynx & Meeko. Jamie Lynn loves The Wizard of Oz, is a shoe fanatic, and is an expert on all things Disney. She has always believed, “It’s kind of fun to do the impossible” & looks forward to making the “impossible” a possibility. (From http://jamielynnmacchia.weebly.com) 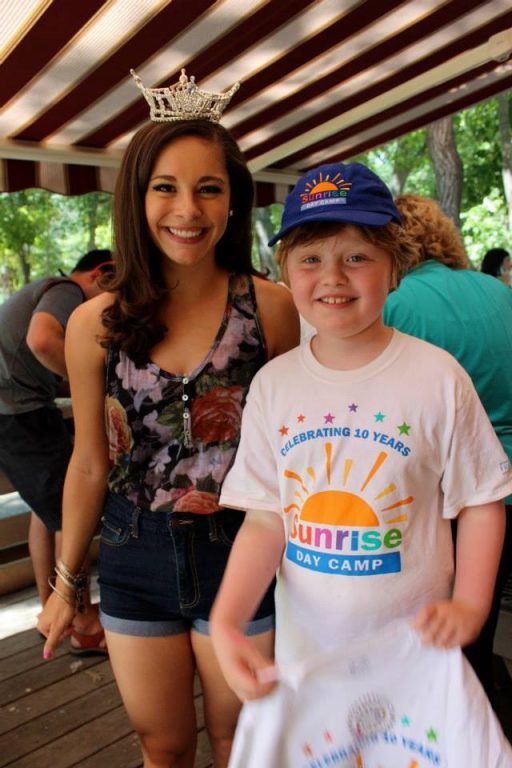 Meeting Jamie Lynn was both an incredible honor and a pleasant surprise. Her savoir faire and radiant beauty polarized the room where she was speaking to a group of women participants of the Floral Park Lions Just 4 Women Expo. Her speech was impeccable and delivered professionally. As an observer I was shocked to find out the young lady speaking so assertively that day was only 25 years old. Since then, I learned a lot more about her and I am very proud to offer our readers the opportunity to learn more about her too. She is a delightful and altruistic girl who spend a lot of her time to help others and she might inspire others to do so. Here goes then the interview that I had today with her. (TTD) 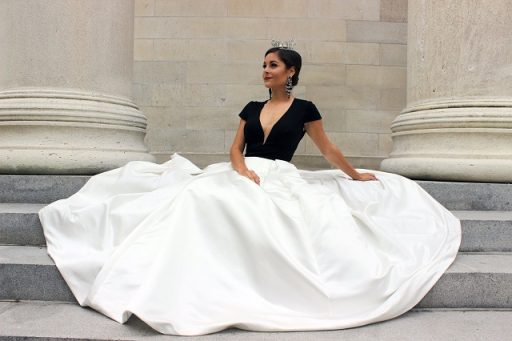 L’Idea Magazine: You campaign to let people know about #MoreThan4. Could you tell us what this campaign is about?
Jamie Lynn Macchia: Cancer is the #1 disease killer of children and each year about 10,380 children in the United States under the age of 15 will be diagnosed. Treatments have not changed significantly in more than a decade. In fact, most medications used to fight cancer in children are designed to combat adult cancers and three out of five survivors develop side effects from receiving treatments that are too strong for their small bodies to handle. Yet, insufficient efforts are being made to help those who are fighting the hardest battle of their young lives.
I always take the opportunity to spread a message many people are shocked by: Of the already small amount of federal funding for cancer research (both adult and pediatric), only 4% is allocated for all childhood cancers combined. This is where the #MoreThan4 movement comes in: to raise awareness of the horrific statistics, and to emphasize the gross inequity of cancer research funding, the #MoreThan4 (percent) movement was born. 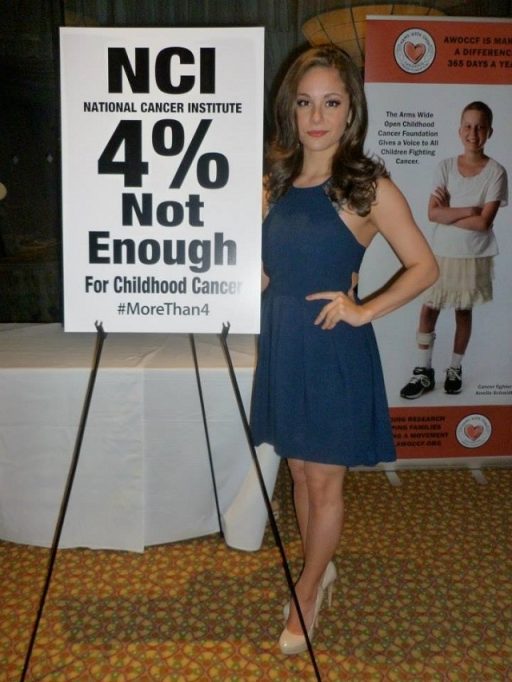 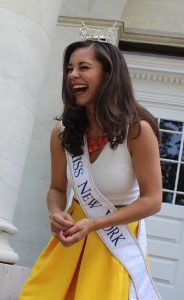 Our children deserve More Than 4 percent of the federal funding for cancer research. Only then will they stand a fighting chance with new treatments and a healthier future – free from side effects. “More Than 4” has become the rally cry for the pediatric cancer community and #MoreThan4 is used on social media sides to show the desperate need for more funding.
In order for effective change to occur, childhood cancer needs to become its own entity in the eyes of the government. It can no longer be lumped in with adult cancers. However, until the government increases financial support, and provides the amount necessary to find treatments and cures, it is up to us to bridge the funding gap.

L’Idea Magazine: You are a Magna Cum Laude graduate of Wagner College, you were Miss New York 2015 and you are only 26 years old… So young and successful, what made you volunteer to help raise money for pediatric cancer research?
Jamie Lynn Macchia: Thank you for the compliment! My passion for my pediatric cancer work unfortunately came from a deep, personal connection. My best friend Dominic was diagnosed with leukemia when we were 10 years old. I witnessed the trials he had to endure: the side effects of medication, the struggle to find a bone marrow match, and the lack of updated and effective treatments. After a valiant battle with this disease, Dominic passed away shortly after his 15th birthday. I was heartbroken. I was frustrated. But, most of all, I was determined to inspire change through action. I am proud of what I have accomplished thus far, but there is still so much to be done. 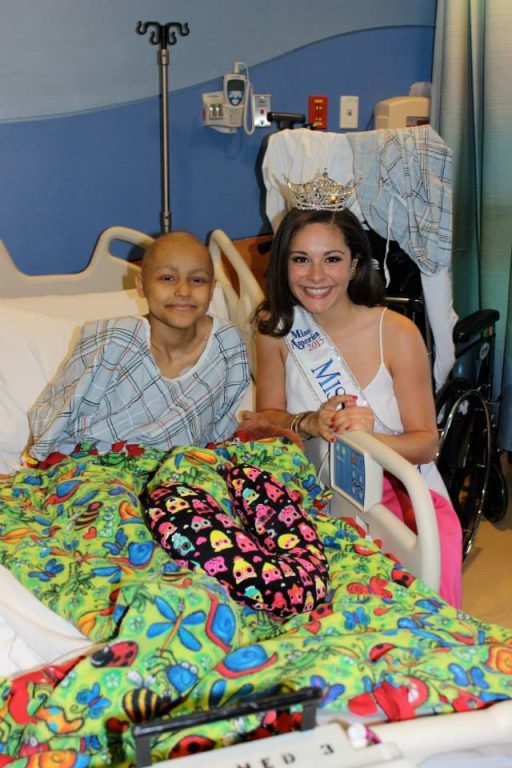 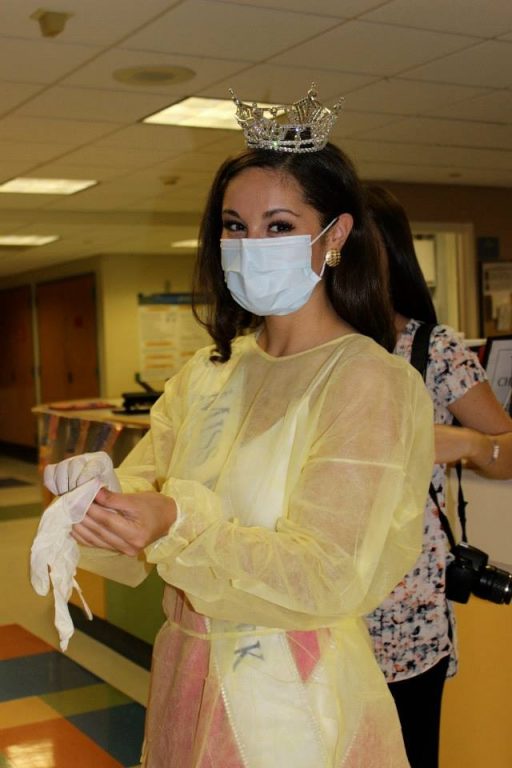 L’Idea Magazine: You have won many prestigious awards, including Miss America Organization Community Service Award, Miss America Organization Academic Award, Children’s Miracle Network’s “Miracle Maker”, SIEDC’s “20 under 40” Award and Star Network’s “Stars Under 40” Award. Is there one that is the most significant for you and why?
Jamie Lynn Macchia: I am honored to have received a number of awards for my charity work, academic achievements, and contributions to the community. It is difficult to pick one that is most significant to me, but I was particularly shocked to have been chosen to receive a “20 Under 40” Award from the SIEDC. This award, given to 20 people under the age of 40, recognizes rising stars in Staten Island who are making a difference in their respective fields. For me, it was humbling to have been considered ‘accomplished in my field’ for my dedication to philanthropy thru pediatric cancer at the young age of 25. It definitely puts more pressure on me to keep achieving and reaching for new heights in the future, but I wouldn’t have it any other way! 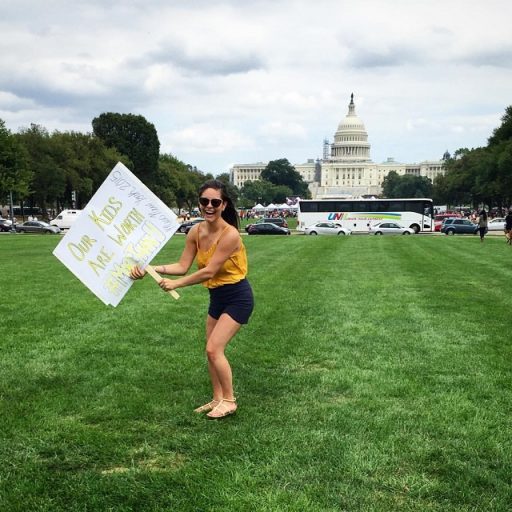 L’Idea Magazine: How positive was your experience, first with participating at and winning Miss New York contest and then participating at Miss America contest?
Jamie Lynn Macchia: I competed for 7 years in the Miss America Organization, holding 4 local titles (Miss Staten Island 2012 & 2014, Miss Greater NY 2013 & 2015) before I finally achieved my goal of becoming Miss New York on my last shot. I could not be more grateful to this organization for all of the experiences I have had and for the scholarship money I obtained which has allowed me to be debt-free after 4 years of college. The Miss America Organization has empowered me, given me lifelong friends, and offered me unique opportunities and experiences.

My time as Miss New York included fashion shows, school visits, galas, fundraisers, mentoring, television appearances – I experienced it all. But I have to say, of all my events, the hospital visits were some of the most memorable. Through Miss America’s partnership with Children’s Miracle Network Hospitals, I had this wonderful opportunity to connect my own platform – Inspiring Action Against Pediatric Cancer – with the organization I loved representing. Walking into a hospital room to visit a child and seeing their face light up because “a princess came to visit” brings a feeling that’s difficult to put into words. For one moment, they get to be a kid again, and I gave that to them. I will never forget those faces. 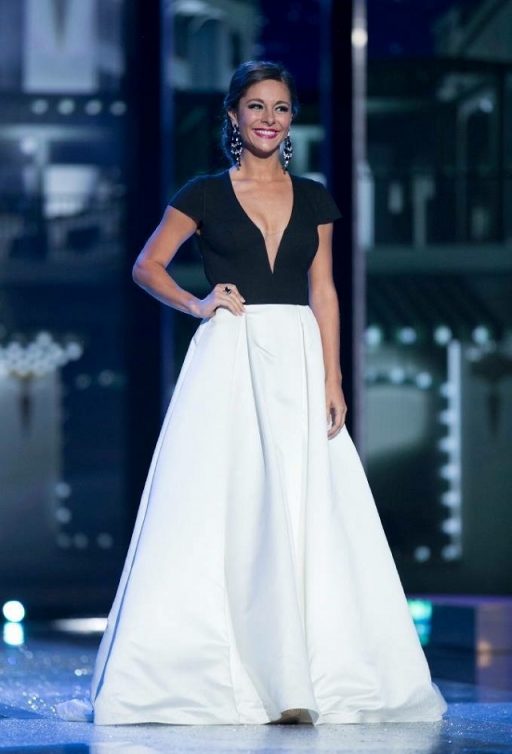 In total I traveled over 17,000 miles for more than 230 events, bringing attention to a multitude of causes and meeting hundreds of people from Paula Abdul to Nick Jonas. Just one of those incredible experiences was competing at Miss America, representing New York. It was surreal to be in an iconic theater (Boardwalk Hall) in Atlantic City, performing on the biggest stage of my life! I will never forget those moments because it is something I never thought I would get the chance to do. After all, you’re more likely to have a son compete in Super Bowl than a daughter compete at Miss America! How cool is that!? 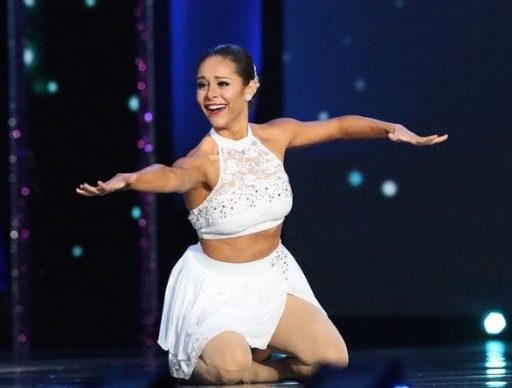 L’Idea Magazine: You were a member of the competitive dance team in college. Do you still dance at that level?(talk about you being a dance instructor, if you want)
Jamie Lynn Macchia: At Wagner College I was a member of the competition dance team. In addition to dancing at both the football & basketball games, we competed in Disney World every year! It really was an incredible experience. Unfortunately, after I completed my time in the Miss America Organization I didn’t find many more opportunities to dance at that level. As a certified dance teacher, I was teaching part-time, but I took this year off to focus on other interests. I would love to return to the studio and share my love of dance with students!

L’Idea Magazine: What are your plans for your immediate future and your long range goals?
Jamie Lynn Macchia: I am so proud of the life I’ve created and where I am right now at 26 years old. In my immediate future, I hope to continue evolving in my current position at Staten Island University Hospital, assisting in the current goal to build a new Women & Newborn Center, Comprehensive Cancer Center, and Hybrid Operating Room. I’m also excited to be running my own business for the first time in my life as a Rodan + Fields Consultant! Looking further into the future, I plan to continue my work with pediatric cancer advocacy and hope to become more involved with Miss New York Organization – helping other young women achieve the personal growth that I did while paying for their college educations.
Oh, and as a recently engaged woman, I’m planning a wedding for October of 2019 with my high school sweetheart. The future looks bright! 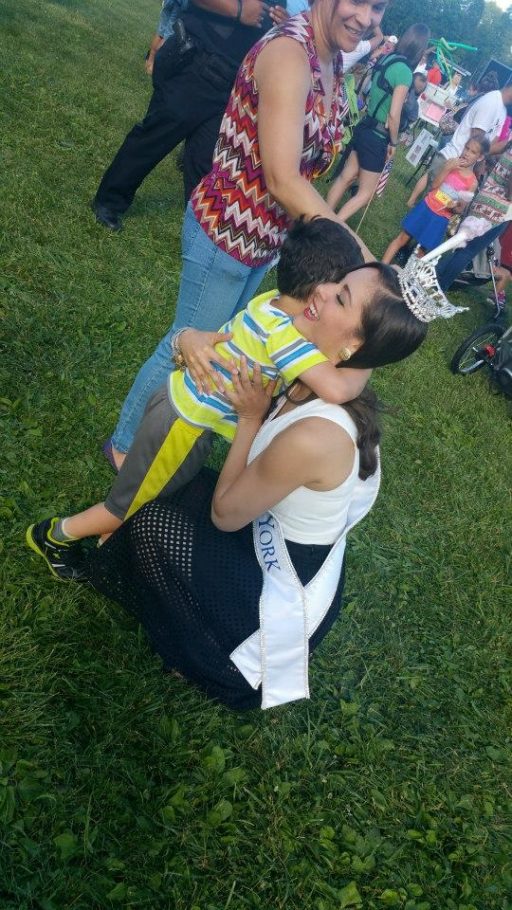 L’Idea Magazine: Congratulations on your future wedding! Any suggestions for our young readers?
Jamie Lynn Macchia: I always have two pieces of advice for young people today. First: Perseverance is key. Though it may be easy to look at another’s success and feel discouraged, you have to remember that everyone’s path in life is different. A perfect example for me was becoming Miss New York – it certainly wasn’t something that happened overnight! It would have been easy to get discouraged and give up, but when you truly have a goal, you have to go for it with everything you have. Second: Use your voice to make a difference. All too often I hear, “Well, what can I do about it?” or “I can’t change that.” But, you can! You have to the power to make a change where you see a need. Go out there and make a difference in this world because the world needs more dreamers.