Marianna Randazzo is an Italian-American author from New York City. Teacher, wife, mother and grandmother, she taught for over 35 years, both in the educational system of NYC and as an instructor at the Garibaldi-Meucci Museum. After retirement, she devoted all her energies to teaching Italian culture. Marianna is an officer in Staten Island’s Capodanno Lodge of the Sons of Italy in America Association.
“Given Away, The Rest of the Story,” published by Idea press, is a novel, based on a true story, which follows the progress of her family, from Sicily to the US starting at the turn of the Second World War and through the post-war years The original book “Given Away, A Sicilian Upbringing,” which was the winner of the NYS Grand Lodge Sons of Italy Literary Award in 2016. was also translated in Italian and published by Idea Press (“Lontano Da Casa, Educazione in Sicilia”)

Her other publications include the biography “Brooklyn’s Best: The Michael Behette Story,” “The Italians of Brooklyn,” several children’s books and numerous articles on education and the Italian diaspora. Marianna is also a columnist for L’Idea Magazine (NY).

In addition to her hard work in the Italian American community, Marianna devotes her time to raising funds for The Huntington Disease Society of America, and to inform the public about that disease. Part of the proceeds of the sale of her books will be donated to this association (HDSA). 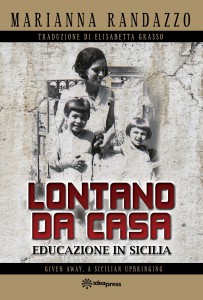 L’IDEA: Marianna, when did you start writing and what was your inspiration then?
Marianna Biazzo Randazzo: I probably started officially writing when I was about ten years old and learned about a “business letter.” I realized that writing gave everyone a voice. In school, we wrote mock complaint letters or requests for information. I remember encouraging my older brother to send a letter and drawings he had made to President Nixon. Surprisingly, Nixon sent us an autographed picture of himself from the White House. What a thrill! It was then I realized the power of words.

L’IDEA: Is “Given Away” a novel or a biography? Who are the main characters and are they still alive?
Marianna Biazzo Randazzo: Given Away is based on a true story. Tina, the protagonist, is still alive and was born in 1931. She is the last surviving sister of the Arezzi family. At 87, she continues to share the details of the years that were written about in the book. She will attest to the fact that all of the details of her Sicilian Upbringing are true. Some names, places, and dates have been changed to protect the innocent! 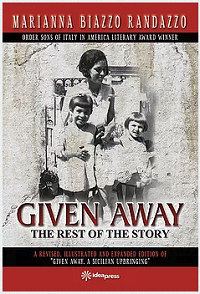 L’IDEA: “Given Away, A Sicilian Upbringing” seems to have evolved into a different book of a sort in “Given Away, The Rest of the Story.” Could you elaborate on that?
Marianna Biazzo Randazzo: Given Away, A Sicilian Upbringing was a story that waited over 70 years to be told by an 83-year-old woman.  It was not until I was an adult that I learned about the very different lives that my mother and her sister Tina lead as children. Hearing only one side of a family’s history from my mom, I found it incredulous that these two sisters had such polar opposite existences in two towns probably less than 10 miles apart. It was then I learned the whole story.  After the first book was written people wanted to know more about the sisters,  the story took on a life of its’ own. I also needed to learn more and with my cousin Lisa Arezzi, the daughter of one of the siblings, we visited the hometown and the actual house where the story took place. We spent 10 days in Ragusa, Sicily.
With the help and encouragement of my editor, Tiziano, The Rest of the Story was written with Tina willing to contribute about another hundred pages to the original book. 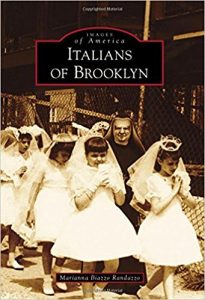 L’IDEA: You just published a new book with Arcadia, “Italians of Brooklyn.” Could you tell us something about that?
Marianna Biazzo Randazzo: After writing the Given Away books, I became more immersed in my Italian culture, roots, and heritage. As a school teacher for over 30 years, I had a different focus on life. I was busy raising my three children and in the end years of my parents’ lives, caring for them. Being Italian was not something I thought much about during my earlier years. It was just who I was, naturally. I cooked Italian, I spoke Italian, I followed traditions and customs, and as a child, I even assumed everyone was Italian.
Once I retired from teaching, I volunteered at the Garibaldi-Meucci Museum. I was shocked to find an Italian American Museum in Staten Island! I soaked up all I could about the actual inventor of the telephone and Giuseppe Garibaldi. Their extensive library opened my eyes to everything Italian. I was soon recruited to be the Director of School Programs and media specialist, jobs I loved because they combined two of my favorite things, education, and culture. I decided to create multimedia presentations about my books and Italian themed subjects. Soon I wanted to write about every Italian since Christopher Columbus and John Cabot! I approached Arcadia Publishing with several of my ideas and remembered the adage, write what you know!
I knew Brooklyn; I lived it, I breathed it, I loved it. My children were also raised in Brooklyn, and I believe they are forever grateful. When I presented my idea to Arcadia, even though they are based in South Carolina, they loved the Brooklyn aspect of it, and they said, “Everyone loves an Italian!”
The book was a challenge. The series is called Images of America, so I had to collect almost 200 original photographs that would tell a story. I didn’t want to buy pictures because although they may have been iconic, they were not meaningful to me. Instead, I reached out to Italians through social media, friends, and families. I interviewed dozens of people from the iceman’s daughter, Angela Solomon, to the founder and creator of the Enrico Caruso Museum of America, Commendatorore Aldo Mancusi.  I was invited to view the photo archives of churches and Italian American organizations.
I was touched by how many people opened their homes and photo albums to me. I wished I could write a book about each one of them! The challenge was telling the story around the photo in a way that depicted the Italian American experience in New York. I hope I did it justice. The second biggest challenge was learning how to scan hundreds of photos at just the right quality. 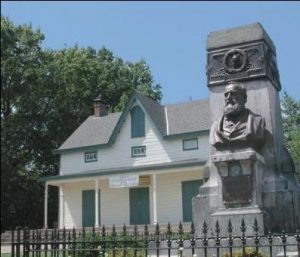 L’IDEA: What is going to be your next literary effort?
Marianna Biazzo Randazzo: Now that I have Arcadia’s attention, I proposed a book about Fr. Vincent Capodanno and Vietnam Veterans. Vincent Robert Capodanno was a Roman Catholic priest who was killed in action in 1967 while serving as a United States Navy chaplain assigned to a Marine Corps infantry unit during the Vietnam War. He was a posthumous recipient of America’s highest military decoration. In 2002, Capodanno’s Cause for Canonization was officially opened, and he is now referred to as a Servant of God.
I am also working on a book with Professor William Castello, a fabulous artist. Bill draws portraits, and I tell the stories. The first in the series will be a compilation of Italian men and women, entertainers, saints, scientists, politicians, and other interesting people.
Another project I have going on is the memoirs of a Syrian-American woman and her experiences as one of the first patrolwoman/police officers in New York City. Several years ago, I wrote a book about her son, Brooklyn’s Best: The Michael Behette Story, Michael was a firefighter who served the FDNY and passed away from cancer-related to his service during the World Trade Center disaster. While writing that book I got to know his extraordinary mother and realized hers was a story to be told as well.

L’IDEA: Do you have any future book presentations that our readers can attend?
Marianna Biazzo Randazzo: Yes and I’ll give you a list you can publish…

L’IDEA: You want to organize an “Italian American Writers Literary Festival” with the Garibaldi-Meucci Museum and Fr. Capodanno Lodge #212. What is that and will it work?
Marianna Biazzo Randazzo: Festa Italiana at Mount Loretto, Pleasant Plains in Staten Island is  believed  to be “the biggest Columbus Day celebration in history.” Last year, people enjoyed live entertainment, meeting celebrities, dancing,  rides,  arts and crafts, visiting representatives from Staten Island’s cultural institutes and clubs, and eating their way through the all-day affair. According to Borough Hall, 10,000 people attended the event on one day! The Garibaldi- Meucci Museum and the Sons of Italy, Fr. Capodanno Lodge #212 took the opportunity to introduce visitors to Italian-American authors. This year, I would like this literary endeavor to grow and have requested several booths and have invited many more Italian-American authors to join us. We are hoping to attract book lovers of all ages to meet and enjoy an array of accomplished and emergent authors.  The event will take place on Saturday, October, 4, 2018. Mt. Loretto is located at 6581 Hylan Blvd., Staten Island, NY.

L’IDEA: Is there a message you want to send to people who feel that they have a story to tell, but they are afraid they don’t know how to do it or get it to the public?
Marianna Biazzo Randazzo: Everyone has a story to tell, if not their own perhaps a family member or a poem, or a work of fiction. Don’t fear the pen (or in today’s time, the computer) Start small, tell someone the story, get feedback,  write it down, send it to a newspaper, a magazine. There are guides to magazine writing in the library; they have everything you need listed in them.   Many people come to me and tell me they have written books, usually what they have written are the beginnings of a book. If you are serious about writing, take a writing course. I still take online courses as I have no interest in getting any more degrees. I also took a storytelling class which led me to participate in a MOTH performance (true stories told live,)   There are meet-up writing groups and free classes at the library.  I like to teach memoir writing classes so follow me on Facebook, and you will find me! I could also be reached at mrandazzo3@gmail.com.
Writing helps you to connect with your life again; it is a great outlet. If you love nonfiction as I do, writing gives you the opportunity to do tons of research, which I sometimes enjoy more than the writing itself. Don’t be discouraged; even if you are never published it could be your legacy to others in the future.