Having a powerful voice with an extended range, a deep knowledge of the techniques involved and being able also to sing masterfully “Bel canto”, the soprano Elizabeth Blancke-Biggs is a true “Italian Dramatic Soprano” and a “Lirico Spinto”, internationally applauded for her vocal renditions and her convincing acting. I caught the beautiful singer between performances and asked her a few questions…

L’Idea: Elizabeth, was singing always your passion? How did you start in opera and when? 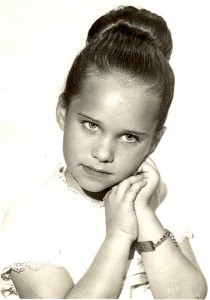 Elizabeth Blancke-Biggs: I was interested in Opera from a very young age. I started by singing in the Children’s choruses in a local company in the L.A. area run by a Sicilian family who owned wineries. I sang in many different operas, like Carmen, Tosca, Pagliacci etc. It was a unique opportunity to sit next to Italians and learn to sing these beautiful works. I then graduated to bigger parts like Frasquita in Carmen, all while still a teenager. I simultaneously sang Operettas and Musical Theater roles. I sang my first full Orchestra production as Maria in West Side Story at 15. I did a lot of dancing and movement in these pieces and I think was really great training to be able to sing and move together. In fact, I am a very physical singer and I find that incorporating movement frees me vocally. I went on to sing Bel Canto roles like Norina and Rosina, and gradually moved into full lyric repertoire like Mimi and Liu. Eventually I added the larger Bel Canto roles and in fact made my two important debuts in this repertoire, my Italian Debut at the Teatro Regio in Torino as Donizetti’s Maria Stuarda in a Jonathan Miller Production conducted by Evelino Pido and my Metropolitan Opera debut as Violetta in La Traviata in the Zeffirelli production conducted by Marcello Viotti. I continued to mix big Puccini and big Bel Canto for many seasons, eventually moving toward the most dramatic roles including Norma, and Puccini heroines like Minnie in La Fanciulla and the big Verdi heroines like Lady Macbeth and Abigaille. This is a progression that used to be considered quite normal and in fact was the career path of singers like Gencer, Caballé, and Scotto, and my esteemed teacher Virginia Zeani among others.

L’Idea: Who was your singing idol? Did you ever have a singer in mind as a reference for your singing?
Elizabeth Blancke-Biggs: I had a few different singing idols. For the raw drama fused with music I loved to listen to both Callas and Scotto. For pure beauty of tone I seemed to be drawn to Spanish singers such as Caballé, De Los Angeles and Lorengar, and the Italians like Ponselle and Muzio. I listen to many different recordings when preparing a piece, not only for the various singers’ interpretations but also to hear what various Maestri do with the music as well, in regard to tempi and interpretation. 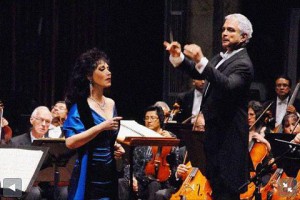 L’Idea: You have been called an “Italian Dramatic Soprano” and a “Lirico Spinto”. Could you explain what that really means?
Elizabeth Blancke-Biggs: An Italian Dramatic Soprano is quite a different animal than a Wagnerian Soprano. The Italian Dramatic repertoire requires many more vocal effects and an extended range to at least High C. There are role requirements such as using full chest for dramatic reasons in parts like Abigaille and Lady Macbeth, along with the need for fil di voce and high piano passages like the ones that occur in the Gran Scena di Sonnambulismo… which ends on a piano D flat. This makes the Italian Dramatic repertoire more technically demanding. A Lirico Spinto is a category that used to mean one who can sing pretty and then when needed give a little “push” to the voice for dramatic effect, like during the big scenes in Aida Act 3 or the confrontation with the Baritone in Il Trovatore.

L’Idea: Who is the character you played that was the most liked by you and why? Who was the most intriguing character you played?
Elizabeth Blancke-Biggs: I obviously enjoy playing Women on the Edge! I love Lady Macbeth because she is one of the most fully realized dramatic roles that I get to sing in an opera. I also love some of the Puccini characters for their down-to-earth personas and more through composed dramatic singing lines. I especially love Tosca because she is so like my own personality, and then there is Minnie in La Fanciulla del West, which is very dear to me, since I grew up in the West and even rode horses. I think the actual act of getting thrown off a horse and getting back on is a very useful mental lesson for continuing in a profession like music! 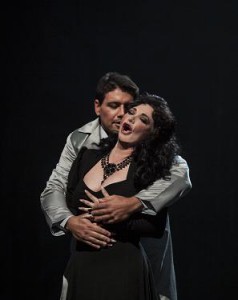 L’Idea: The Verdi’s bicentennial has been celebrated all over the world, and you were a pivotal part of that. Could you tell me more about that?

Elizabeth Blancke-Biggs: I did a lot of Verdi this year as I do every year. I started the year with a wonderful concert with the Orquesta Sinfonica de Bellas Artes in Mexico City, singing seven of the most challenging Verdi pieces in the repertoire. I was a great thrill to me to sing these pieces on the very same stage as the amazing Maria Callas. I then went to the Teatro Solis in Montevideo to reprise Lady Macbeth in a beautiful production featuring a terrific international cast, in a co-production with the “Orquesta Filarmónica”. I finished the year with another Verdi Aria concert in Mexico, this time at the Sala Nezahaulcóyotl for the UNAM. I will continue with more Verdi in January, when I go to the Grand Theatre de Geneve to reprise Abigaille in Nabucco. 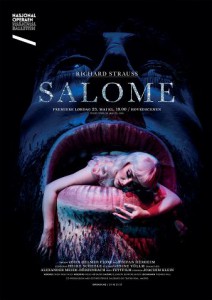 L’Idea: Did you find any particular character or part difficult to interpret and why?
Elizabeth Blancke-Biggs: Many if not all the roles I sing are considered “difficult.” They are vocally all demanding and some require such dramatic intensity that they are exhausting, emotionally and physically. In particular, the production of Salomé I sang in the fabulous Stefan Herheim production from Salzburg was very demanding physically, and basically required running and climbing, and even dancing all while singing some of Strauss’ most beautiful and dramatic music. While these roles are demanding, they are also some of the most rewarding experiences as well! I always feel so fortunate to be able to inhabit these amazing women. Working with Stefan was also so rewarding. It was supposed to be a revival and ended up being a total re-staging because he wanted to fit the show with my personality rather than imposing one….a very unusual and exciting collaboration. 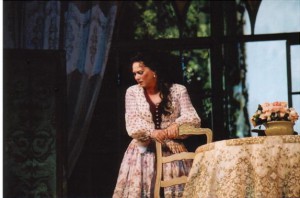 L’Idea: Who were the most interesting Artistic Directors and Conductors you met and worked with?
Elizabeth Blancke-Biggs: Obviously my MET Debut was such a wonderful experience… I mean, to be able to sing Violetta in the gorgeous and touching Zeffirelli production… it was like a dream come true!! I also did a very interesting Macbeth production with the Director Hugo de Ana which was a sort of Kabuki type interpretation. I enjoyed this version because, while being innovative, it also paralleled the social parameters of the grasping and social climbing couple in their bloody rise to power. I find that these sorts of ideas work best if the two worlds of the original and the modern have these  commonalities. I have also enjoyed collaborating with Michael (Mo. Michael Recchiuti) on several occasions, it is always such a pleasure to make music with the person that knows you the best, and can anticipate your needs vocally and dramatically. I particularly enjoyed singing Trovatore and Ernani with him, as he worked with all the best of the “Old School” Italian Maestri and helped me learn to inhabit those styles to better understand the true Verdi singing.

L’Idea: Which is the theater that impressed you the most?
Elizabeth Blancke-Biggs: The Den Norske Opera in Oslo is an amazing organization, both artistically and in an administrative sense. The building is an architectural marvel, large and impressive while still maintaining an outstanding acoustic presence (this is why I have agreed to go back to Oslo for my debut as Turandot). And, of course, the MET is a fantastic place to work. The technical prowess and sheer number of performances is daunting and their technical staff makes it all seem like business as usual! And the Teatro Massimo in Palermo, where I sang the Centennial production of La Fanciulla del West, is an amazing theater. It is so beautiful and representative of the word “Grand” Opera. It was so rewarding to work in this marvelous theater and to be conducted by dear Mo. Bruno Bartoletti in one of his final shows…what a fortunate experience. 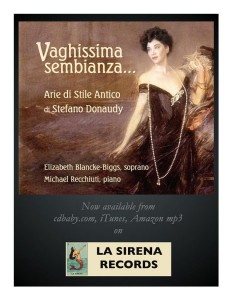 L’Idea: What projects are you working on?
Elizabeth Blancke-Biggs: I just completed a project that is very dear to my heart. Michael (Mo. Recchiuti) and I recorded 28 of the songs of Sicilian composer Stefano Donaudy entitled “Vaghissima sembianza.” A few of the songs were very popular for a time and were recorded by many of the singers of the  “Golden Age,” including Ponselle, Muzio, Caruso and Gigli. They then fell out of popularity. We were eager to re-introduce them to modern audiences. The music is lovely and evocative of the Italian spirit. They are a sweet travelogue of the many styles of Italian song throughout history, including Gigues, Frottolas, and Tarantellas, along with the more well-known sentimental songs like “O del mio amato ben” and “Vaghissima sembianza.”

L’Idea: Are the audiences in Central and South America different in behavior and response than the ones in USA and Italy?
Elizabeth Blancke-Biggs: Audiences in Latin America tend to be a bit more enthusiastic and less self-conscious. They don’t seem to feel the need to behave differently because they are at an Opera concert as opposed to a Pop concert. I find this enthusiasm for music in all its forms quite infectious. It is really quite a thrill to sing for an audience that yells and applauds like you are a “Rock Star!” It is one of the reasons I enjoy singing in Latin countries. The audiences in Italy and America tend to be more reserved… but it is possible to whip them in to a frenzy if you put on an exciting show. No matter how controlled a society, there is always the visceral thrill of an exciting performance that will engage them. In fact, I was amazed at the LONG and enthusiastic curtain calls we took after the Salomé in Oslo; the audience really let themselves be inspired and moved by that wild and crazy production and Strauss’ amazing Music. 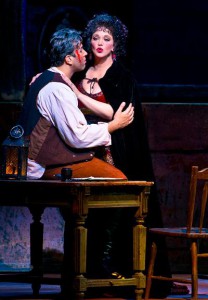 L’Idea: Do you have any suggestions for a young person interested in singing in operas?
Elizabeth Blancke-Biggs: Don’t go into music expecting to be a Star or to be loved. You must sing because you cannot imagine doing anything else in the world; there is no greater gift than to try to bring something of yourself to the composer and his art! That is all the glory… art for art’s sake.

L’Idea: Do you think there should be more done in the USA to attract the young people to opera? How would you go about that?
Elizabeth Blancke-Biggs: Well…. that’s a long speech. We used to have a lot of music in the schools; I myself was introduced to music in this way, and I think it was very important for young people to learn about these things, whether they are planning a career in Music or not. It helps the mind to focus and forget about life and to channel problems creatively. I would hope that we can once again return to a Nation that values great Art and Artists. I really think the only answer is re-introducing music back into the curriculum; that way it is a part of life for children of all ethnicities and economic backgrounds. Some of the greatest Artists came from very humble backgrounds. 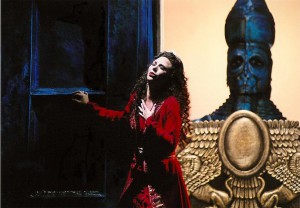 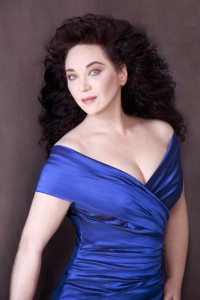