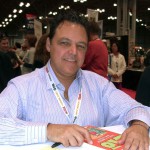 Mark Tatulli is an internationally syndicated cartoonist. He was awarded the National Cartoonists Society’s Best Newspaper Comic Strip award in 2008 for Lio, after three nominations, and is also known for his popular comic strip Heart of the City, both syndicated by Universal Press Syndicate. Mark is also an animator and television producer, known for his work on the cable reality television series Trading Spaces and A Wedding Story, for which he has won three Emmy Awards. His dark humor is confirmed in a cover for a Lio collection, as described by Washington Post’s Michael Cavna: “The front cover features Lio excavating a “Calvin” skull while his pet cephalopod examines a stuffed Hobbes. The back cover features a photo (taken by the creator’s son) of Tatulli mimicking the iconic Watterson image — one of the very few publicity stills of Watterson actually known to exist.”  In the same article, Tatulli comments on his  cover creation: “Well, “Calvin and Hobbes” is sort of this sacred cow among comic strips that others dare not touch — although you do see spoofs online…but print people tend to stay away. And there’s nothing I like skewering more than a sacred cow. It’s a perversity that harks back to my childhood … knowing I shouldn’t do something makes me want to do it all the more.” Although traveling, he kindly consented to an interview with L’Idea Magazine, which follows… 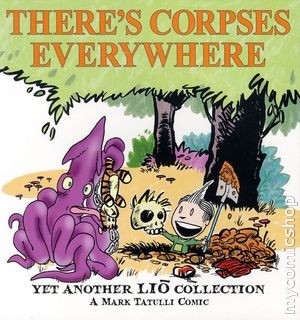 L’IDEA: You stated on “Humor Times” that you were “always a cartoonist.” Could you explain that statement to our readers?
MARK TATULLI: I drew comics for all my school newspapers:  elementary school, middle school, and high school.  I always was a huge fan of cartoons, animated and printed, since I was a little kid.  But it was studying Disney that taught me that, in addition to being funny, cartoons could have deep, believable characters and stories with real emotional depth.

L’IDEA: Which are the comic strips that had the biggest influence on you personally and on your work?
MARK TATULLI: Gosh, there are so many.  I would probably say BLOOM COUNTY, DOONESBURY, MAD Magazine, and CALVIN AND HOBBES influenced me most as a writer.  Artwork-wise, I took something from all the cartoonists that I’ve examined at length over the years.

L’IDEA: “Bent Halos” was your first syndicated comic strip. What was it about? Do you plan to ever revive it?
MARK TATULLI: It was a strip about two ne’er-do-well guardian angels, doing the best to positively influence their human wards and rarely succeeding.  I have no plans to revive it.

L’IDEA: “Heart of the City” debuted in 1998 and has been a success from day one. The main character is Heart, a resolute, fun-loving, precocious young girl who makes Philadelphia her world of adventures, mostly lived with her friend Dean. Did you have any references for your characters in that strip, that is people who you knew and modeled the characters after, or are they completely a creation of your mind?
MARK TATULLI: All of my characters are a reflection of my collective experience over the years.  I had little kids at home when I starting writing HEART, so it was just a matter of listening to them to get ideas for stories and gags.  It’s a bit harder now, 15 years later, to continue to come up with new stories and situations.  But I know these characters so well, it sort of writes itself.

L’IDEA: Your comic strip “Lio” has been a major accomplishment in your field, receiving positive responses for both its daily strips and its book collections, besides the National Cartoonists Society’s divisional award for Best Newspaper Strip in 2008. What do you think is the reason for its success?
MARK TATULLI: If I could answer that, I would rule the world.  I have no idea how to achieve success in comics.  It’s hit or miss.  With LIO, I wanted to create something like nothing else on the current comics page.  As long as you write honestly and from your heart, you can maintain a comic strip for years to come.  Success and acceptance is completely in the hands of the readers.  The cartoonist must entertainment himself first, and hopefully readers will like what you do. 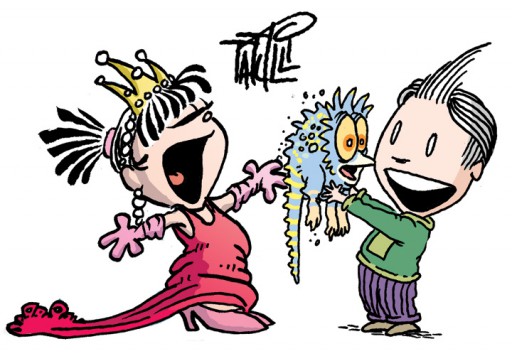 L’IDEA: Both your characters Heart and Lio live in a fantasy world, although Lio definitely beats Heart hands down with its imaginary view of the world. What other similarities and differences these two characters have?
MARK TATULLI: HEART’s humor is primarily script driven, and LIO (being a wordless “pantomime” strip) is almost entirely physical humor.  It makes it easier to separate the two worlds, which is essential.

L’IDEA: Your new book “Desmond Pucket and the Mountain Full of Monsters” is going on sale on August 5th and it carries with it a lot of surprises; there is, for example, a  dedicated website with downloadable assets, such as teachers’ guides, printable posters, activities, and much more. The children will surely appreciate all these extras that your book offers. This is the second adventure for Desmond (the first was in the book Desmond Pucket Makes Monster Magic and it had a great success) and both contain monsters. Why this topic? What are the main traits of Desmond? Do you believe kids identify with the main character?
MARK TATULLI: The first rule of any writing:  write what you know.  Desmond is a lot like I was in Jr. High…I loved monsters and special effects and monster makeup and haunted house rides.  It seemed logical to give these traits to Desmond, though he takes more chances than I ever did.  Desmond’s world is more settled in reality than my comics, and I think this makes him relatable for kids.  At least I hope so! 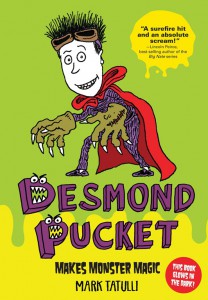 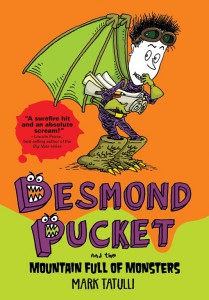 L’IDEA: Do you expect to continue with Desmond’s adventures in more books?
MARK TATULLI: As long as kids want to keep reading them, I’ll keep writing them!

NOTE: Children can meet Desmond Pucket on its dedicated web site (www.desmondpucket.com), where they can find comments about the main character, news and reviews by readers, various activities and games, and a blog by the author!

Trading Spaces, one of the shows for which Mark Tatulli won an Emmy.

L’IDEA: You also are an accomplished filmmaker and animator, and you have received three Emmy Awards for your work. Could you tell us more about that? (the programs, what you did, etcetera)
MARK TATULLI: I was the creative director at a Philadelphia video post-production facility.  I designed, art directed and produced animated opens and graphic packages.  We did a lot of TV shows and commercials.  I won three Emmys for Production design on three different TV shows that are no longer on the air.  My last job was supervising a graphics department with 10 animators. In addition to that, I did a lot of design and storyboards.  As of August 2013, I’ve been a cartoonist/author full time.  But I did graphics and animation for 31 years professionally.

L’IDEA: You are an illustrator, a writer, an artist, a filmmaker, a producer… how did you get involved in so many different activities?
MARK TATULLI: I like all those jobs for different reasons.  I miss the post-production business now that I do comics/books full time.  Doing TV can be exhausting, but was always exciting to me to start a new challenge, especially of we have a limited budget.  That’s when the real creativity has to kick in.  I look at work in all these fields as building creative muscles.  The more you work, the stronger you get.  I still watch TV commercials and wonder how they did something and how can I replicate it.  It’s a hard habit to break! 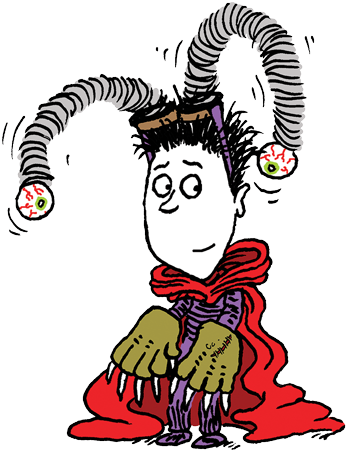 L’IDEA: If, hypothetically, you could be working in any job position in the world, what would you be and why?
MARK TATULLI: I’m doing exactly what I want to do.  Making comics and books is a lonely occupation, but it’s a control freak’s dream.  I am totally in charge of the worlds I’ve created and that’s just the way I like it!