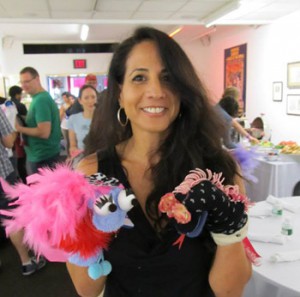 Maria Scrivan’s cartoons are published in MAD Magazine, Parade Magazine, Prospect Magazine (UK), on Mashable.com, Salon.com. Funny Times and many other publications.
Maria licenses her work to Recycled Paper Greetings, NobleWorks Cards, RSVP Greetings, American Greetings, Oatmeal Studios, CheckAdvantage and Neat-O Shop.
Her corporate clients include IBM, Deloitte, Emcor, Mastercard, AT&T, Avaya and many more.
Her daily panel Half Full appears daily on GoComics and is syndicated online by Universal Uclick. It also appears daily in print in Hearst newspapers the Greenwich Time and Stamford Advocate. It is syndicated in Sweden by Content Central and is syndicated on GoComics in Spanish.
Maria is a member of the National Cartoonists Society. 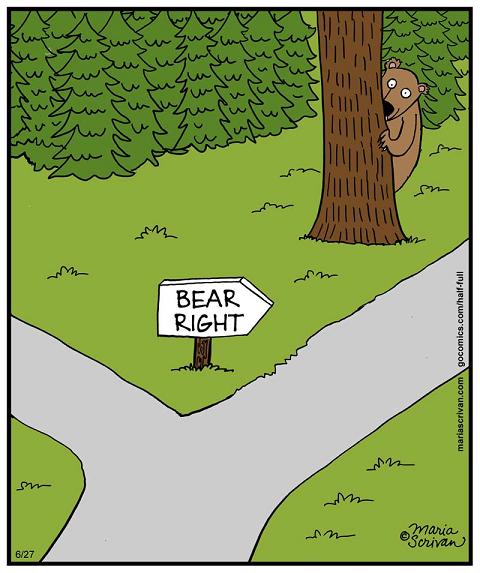 L’IDEA MAGAZINE: Maria, were you always interested in becoming a cartoonist? Which ones were the strips that inspired you, impressed you and influenced you the most?

MARIA SCRIVAN: I have always wanted to be a cartoonist. From early childhood, I was always drawing, doodling and reading the Sunday Comics start to finish. I had every Garfield book that existed and loved Peanuts, Calvin and Hobbes and The Far Side. I was most influenced by Jim Davis (Garfield) and Sandra Boynton. My cartooning career started as a cartoonist for my high school and college newspapers. Whenever there was an opportunity for a creative essay I would draw it instead. In high school English, I created a cartoon mock “Cliff Notes” for my final project spoofing the books we were supposed to read all semester. As daring as that was, I got an A. Cartooning has always been my favorite form of communication. I love the immediacy and the shorthand of expression you can achieve with minimal language and just a few lines. 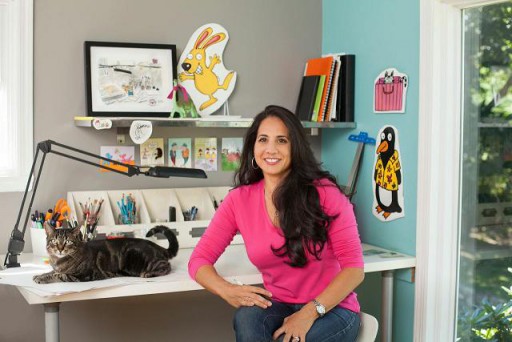 L’IDEA MAGAZINE: Maria, how did your strip “Half Full” develop? What is the theme of the strip? Was it always a one-panel comics or did you dabble with multiple-panels strip version?
MARIA SCRIVAN: I had been writing and drawing magazine gag cartoons so Half Full was a natural transition. I use a multi-panel format for some pieces and have done some experimenting with a character-based strip, but so far I seem to enjoy the single joke format. There are many different subjects in Half Full. Some of the recurring themes are animals, technology, pop culture and relationships.
The most successful cartoons seem to be the ones based on human nature, and authentic universal human experiences. That authenticity is something people can relate to and laugh at. 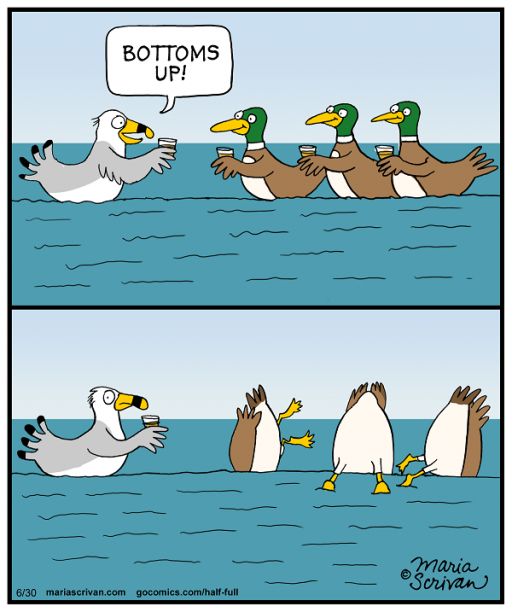 L’IDEA MAGAZINE: Have you ever used people around you, such as friends or relatives, as characters in your strip, even if disguised as animals?
MARIA SCRIVAN: Absolutely. So many of my comics end up being somewhat of a self-portrait of something I experience or observe, so it’s inevitable that people I interact with might end up cartoonified. Plus, now they can look at my cartoons and try and figure out which ones they are. 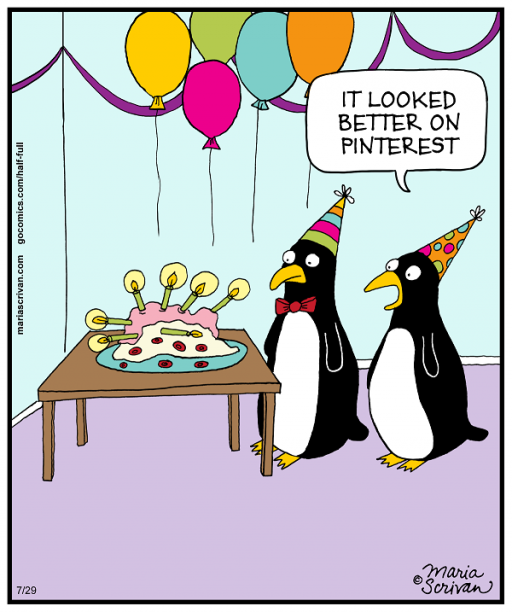 L’IDEA MAGAZINE: Where do you find your inspiration for your strip?
MARIA SCRIVAN: Everywhere! I never know when an idea will strike, so I keep a sketchbook with me at all times. I always have my phone with me so I can jot down an idea or have Siri take dictation. Inspiration doesn’t always come from something I find funny—many of the jokes are derived from things that evoke strong emotions of any kind—frustration, anger, sadness. I think the world is in a really funny place right now with our obsession with technology, fascination with celebrities and the endless stream of over-the-top reality TV Shows. The good news is there is an endless source of material. 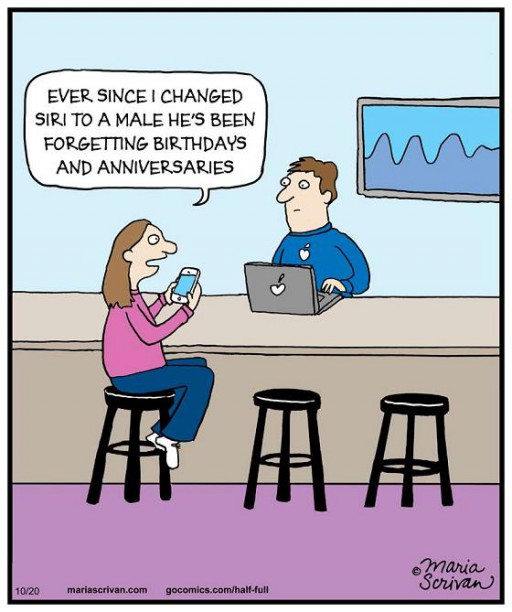 L’IDEA MAGAZINE: How much inspiration did you get from your two cats? Why do you assert that your cat Doski is your assistant?
MARIA SCRIVAN: In addition to the cats, we also have a little dog named Toby. They all have such quirky personalities and are a constant source of inspiration. Milo likes to hunt clothing and howls as he drags pants around the house, Toby is a miniature Dachshund and is comical no matter what he does thanks to his vertical challenges. I refer to Doski as my “assistant” because he likes to hang out in the studio and help out. By helping out, I mean sitting on my artwork, pushing my pens on the floor and taking naps… 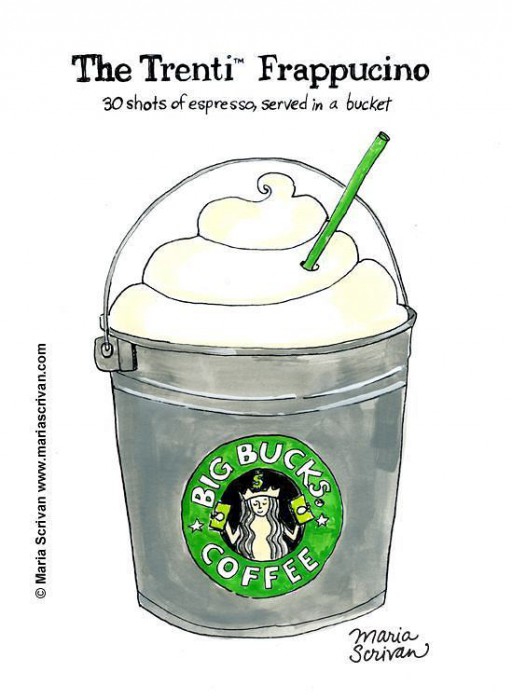 L’IDEA MAGAZINE: You are involved in various activities: greeting cards design,cartoons, book writing, illustrations… Of these, which came first and how do they influence each other?
MARIA SCRIVAN: The cartoons translate very well into greeting cards and other licensable products. With my characters, I have so many possibilities. The books are separate projects entirely. 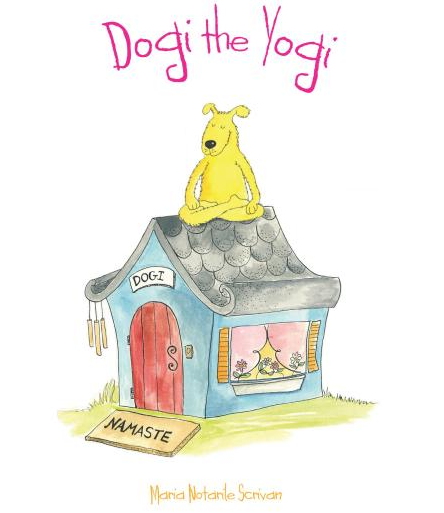 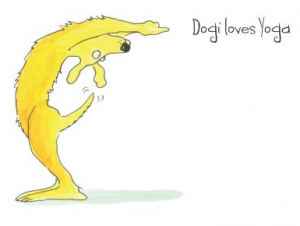 L’IDEA MAGAZINE: What is your children’s book “Dogi the Yogi” about?
MARIA SCRIVAN: “Dogi the Yogi” is a nonfiction children’s book about a dog who loves yoga. Dogi guides children through a series of yoga poses. The idea for the book came from a our family’s beloved Golden Retriever, Kevlar. When my husband and I stretched in front of him he would stretch along in a Downward Dog. Watching him inspired me to create the character. I have been practicing yoga for most of my adult life and it has done so many positive things for me, mentally and physically. I wanted to share those benefits with a younger generation.

L’IDEA MAGAZINE: Could you tell us something about your experience as substitute cartoonist for the strip Rhymes with Orange?
MARIA SCRIVAN: No one can substitute for Hilary Price, her work is brilliant! I was so honored and grateful for the opportunity to be a guest cartoonist for a week. The best part was seeing my comic in the Sunday Funnies for the first time.

L’IDEA MAGAZINE: The Reality Show Mashups that you created for Mad Magazine are very funny. Could you tell our readers how did the whole project start and what was it about?
MARIA SCRIVAN: I’m fascinated with outrageous reality television. I can’t believe the premise of some shows and often wonder how they came into existence. While I can barely watch them, I am especially fascinated with Toddlers and Tiaras, My Strange Addiction and Hoarders. I can only imagine that shows like that are successful because people watch them and think, “No matter how bad my life is, at least I’m not eating dry wall or hoarding rats.” I started doodling and thought—what if we mix this whole thing up—Real Housewives hoarding Birkin Bags, Swamp People in Tiaras, the Biggest Housewife… and then the whole thing came together. Once I got rolling the piece wrote itself. There is endless material in the fantasy land that is Reality TV. 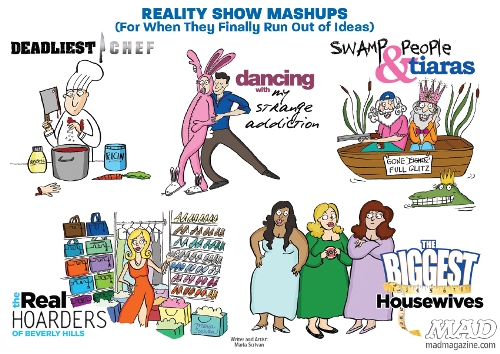 L’IDEA MAGAZINE: Do you have any projects in the works at the moment? What about the near future? Do you expect to expand into graphic novels or maybe another type of comics?
MARIA SCRIVAN: I have am working on some humor and children’s books and am excited to announce that I just signed with terrific literary agents Gillian MacKenzie and Allison Devereux. I love the idea of graphic novels. I’m constantly experimenting with new ideas—who knows what the future will bring. 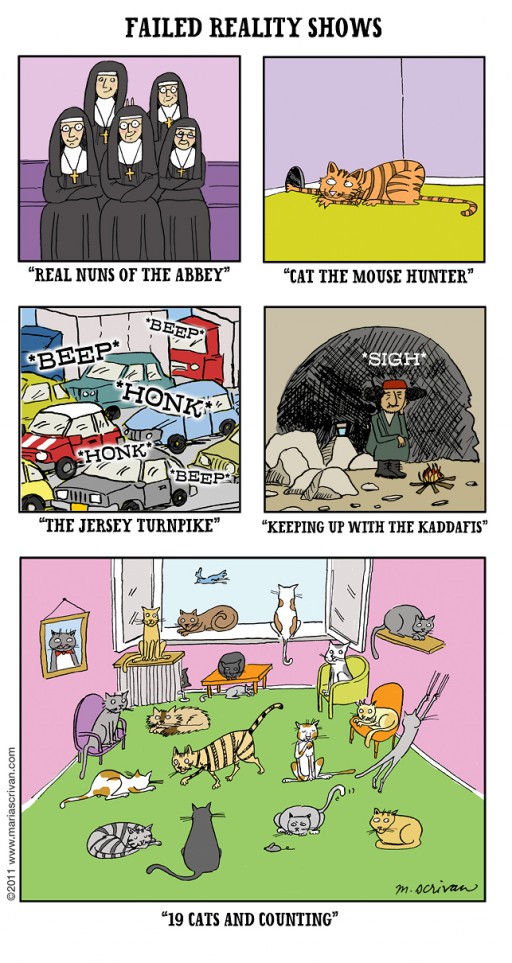 L’IDEA MAGAZINE: Do you have any writers who you would love to illustrate the books for, but you did not have the opportunity to? What about magazines that you would love to have your work appear in?
MARIA SCRIVAN: What I would really love is to see one of my characters as a Macy’s Thanksgiving Day Parade balloon. L’IDEA MAGAZINE: A lot of people claim newspapers, and comics with them, are doomed and will be completely replaced by the Internet. Do you agree with this gloomy view of the world? What do you think is the future for cartoonists?
MARIA SCRIVAN: Things are changing and creating more opportunities in different formats. I was fortunate to work as an Art Director at an interactive advertising agency when the internet was just developing on a commercial level. People did not know where the internet was going or how to monetize it. I feel like we are at a similar crossroads in the tablet and mobile space with regards to publishing. People are experimenting to see what works. I think there are boundless opportunities and our content needs are even greater. 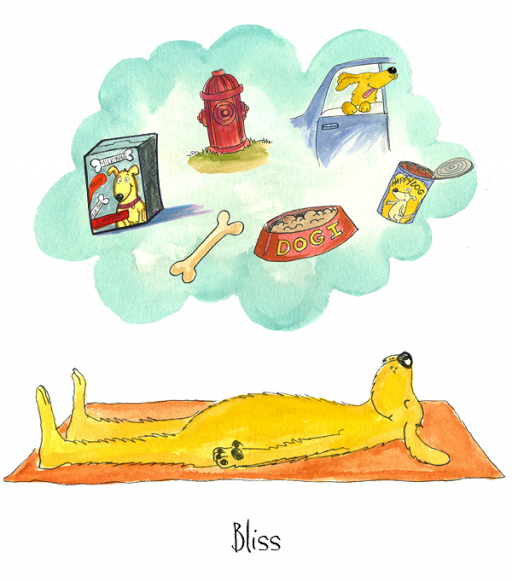 L’IDEA MAGAZINE: You are very devoted to exercise and have participated in various athletic benefits. How important is that in your life and why?
MARIA SCRIVAN: Exercise is essential for my creativity and happiness. I solve so many creative problems and get so many ideas while I’m on the road running or cycling. Exercise helps me stretch, literally and figuratively. I am a two-time Ironman Triathlon competitor which was a longtime goal. I had no idea how I would be able to swim 2.4 miles, ride 112 and then run a full 26.2 mile marathon. Getting through it was a matter of many months of training and taking one step at a time.
Getting thorough those 140.6 miles has helped me in with many other life goals. Learning to break things into small tasks, staying consistent and pushing through even when I didn’t feel like it are skills that have translated into so many things that I do.
I love adventures and challenging athletic endeavors. Some of my favorites were riding from Montreal to Maine to raise money for AIDS research, riding from San Francisco to Los Angeles for the same cause and a bicycle ride to the top of Mt. Washington in New Hampshire.
There are so many metaphors between exercise and life—there are uphills and downhills, headwinds and flats, but you need to just keep pedaling.

L’IDEA MAGAZINE: If you could be doing any jobs in the world, what would it be and why?
MARIA SCRIVAN: Cartoonist. This is it. 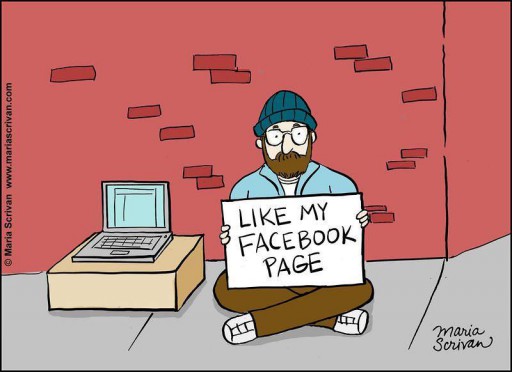 L’IDEA MAGAZINE: Maria, if you could meet a person, any person in history, regardless of time constrictions, who would that person be and why?
MARIA SCRIVAN: I would love to meet Stephen King. I love his work, which doesn’t really make sense because I can’t set a single toe into a haunted house (not even the innocuous one at Disney World with the friendly ghosts.) His stories and characters suck me right in. It will be 3 in the morning and I am trying to fit in just one more chapter. I’m blown away with how prolific he is, all the while maintaining unique stories and fascinating characters. Special note: don’t bring a horror book about a cabin in Maine to a cabin in Maine. I also learned so much from his non-fiction book “On Writing.”