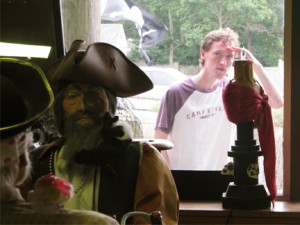 Kory Merritt started cartooning and illustrating while attending SUNY Brockport. His weekly comic strip, Brockport Chronicled, won the John Locher Memorial Award in 2007. He signed a comic strip development contract with Creators Syndicate in 2009, although that has since expired. LSoS, a step in a different direction, was largely influenced by folktales Kory learned as a counselor at Camp Kenan in Barker, New York. Kory illustrated the comic strip Poptropic

L’IDEA MAGAZINE: Were you always interested in becoming a cartoonist? Which ones were the strips that inspired you, impressed you and influenced you the most?
KORY MERRITT: I’m currently much more interested in book illustration than cartooning, though I guess they’re related. As a kid, I loved illustrated books, particularly those of Bill Peet. I recently reread his illustrated autobiography – it’s very inspiring. When I was a little older, I found old collections of “Calvin and Hobbes” and “Bloom County” in my town’s used bookstore, so Watterson and Breathed would be my top cartooning idols, along with Wiley Miller and Pat Oliphant.

L’IDEA MAGAZINE: Which ones are the contemporary comic strips you like the most and why?
KORY MERRITT: I honestly don’t read comic strips regularly anymore. But since I love to talk about myself, I’ll mention some of my favorite authors. My current favorites are Terry Pratchett and George R.R. Martin. Pratchett is amazing – hilarious, insightful, witty, complex – he does it all. The only downside to reading Pratchett is knowing I could write for a century and never come close to his level of genius. He’s humbling. I started George R.R. Martin’s books about a year ago, and I totally devoured them. I’m anxious for the sixth book, but know such complicated and beautifully-written stories take time. I’m refusing to watch the “Game of Thrones” TV show until the books are done and I’ve read them. Other favorite authors include Stephen King and Brian Jacques (a childhood favorite). 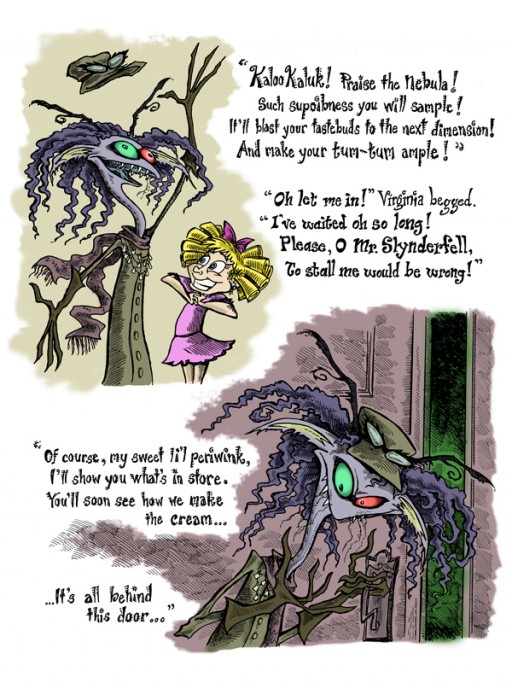 L’IDEA MAGAZINE: Your comic strip Brockport Chronicled won the John Locher Memorial Award in 2007. What was the subject of this strip? How long did it last? (I will need a jpeg of the strip to put in the article)
KORY MERRITT: Oh, that comic was terrible! My current stuff is far from perfect, but leaps and bounds better than my college comic. But at least my college comic allowed me to grow as an illustrator, and I was paid surprisingly well for my editorial cartoons. The comic revolved mostly around local issues, and it was pretty much a “Bloom County/Doonesbury” knock-off, but without recurring characters. Winning the Locher award was luck – I had maybe four cartoons that were slightly better than terrible, and those are what won me the award and the free trip to Washington. Dick and Mary Locher are wonderful people. 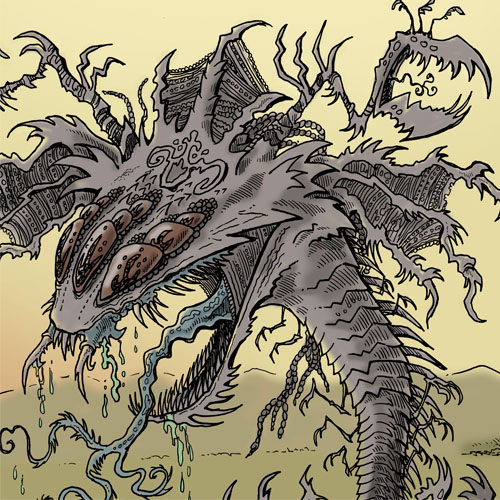 Trekkledoon Gilogorgo
The Trekkledoon Gilogorgo was contracted to play the creature in the desert pit in “Return of the Jedi,” but dropped out due to creative differences with George Lucas. The Gilogorgo’s biggest pet peeve is when people mispronounce its name (it’s “Hee-logorgo”).

L’IDEA MAGAZINE: Kory, how did you develop The Lost Side of Suburbia? Was it meant to be as a different type of comic strip or a graphic novel for children presented in installments?  (Readers, note that an introduction to The Lost Side Of Suburbia states: “Welcome to a land of strange stories and weirdly-spun yarn, where oddities and unmentionables lurk behind every tale. Here you will witness the plight of the mysterious Heckbender, suffer the misadventures of Derring-Do Dan, learn the unsettling secret of the Slynderfell Ice Cream Cavalcade, and behold the unraveling of The Bogey. A word of caution: stay on the sidewalks, avoid shortcuts through Halfrock Swamp, and do NOT under any circumstances make business transactions with C. Percival Trullus”)
KORY MERRITT: I wanted to write children’s books, so that’s essentially what Lost Side is supposed to be – just a collection of loosely-related stories. It was never a comic strip – I always intended prose narration, but I knew I’d need illustrations, for that’s my strength, I think. I had been doing cartoons for college and a short-lived newspaper for a few years, so I had developed a style that sort of resembled an editorial cartoon.

L’IDEA MAGAZINE: Is the humor in The Lost Side of Suburbia something that you picked up from teaching young kids?
KORY MERRITT: The stories in “Lost Side” are full of nasty little monsters. So yeah, that probably comes from working with young kids. 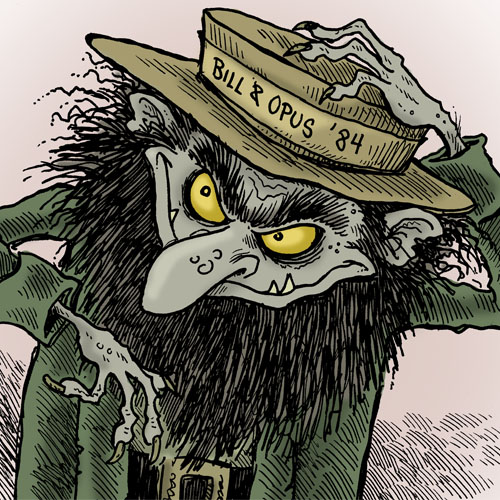 C. Percival Trullus
Chisler, charlatan, and peddler of bootleg “Calvin and Hobbes” merchandise, C. Percival is not to be trusted under any circumstances.

L’IDEA MAGAZINE: In The Lost Side of Suburbia, which is the character you love the most and why?
KORY MERRITT: I guess I like drawing the weird, creepy creatures the most – the things from the swamp and the deep ocean. I’m sort of a wildlife nut, especially when it comes to strange animals like squids and anglerfish and olms and hellbenders and such. Ever hear of a siren (the amphibian sort)? If not, look them up – they’re wild! 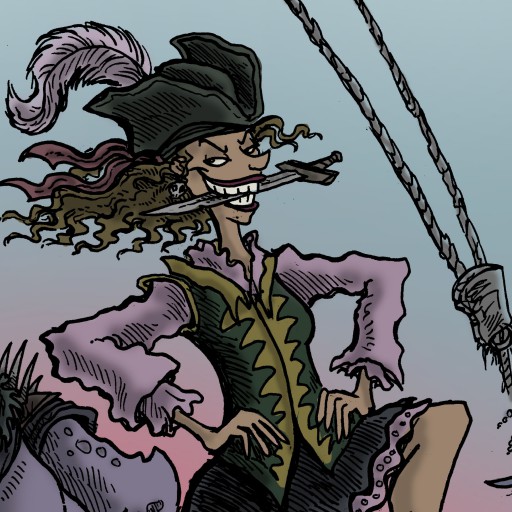 Dastardly Diana
Nothing could make the gloomy Princess of Wunderdum laugh – not clowns, Dave Barry columns, Curb Your Enthusiasm, BBC’s The Office, NBC’s The Office (not even when it was good; nobody thinks post-Michael Scott Office is funny)…Nothing. One day she was visited by Derring-Do Dan and his comedy weasels, who reduced her to joyous hysterics. She then decided to leave her sheltered life behind, eloped with the villainous Kommander Kroakula, and became forever known as the roguish Dastardly Diana.

L’IDEA MAGAZINE: You are taking a break from TLSoS. When do you expect it to come back? What will the subjects be in this reborn TLSoS?
KORY MERRITT: I probably won’t be working on “Lost Side” stories again until next spring or summer. Teaching and freelance illustration projects are consuming my schedule. When/if I do come back, I’m hoping to make the transition from web books to print books. All of my past “Lost Side Suburbia” stories need a lot of retooling, of course. I consider the online versions rough drafts.

L’IDEA MAGAZINE: You are the illustrator of the comic strip Poptropica. How was this cooperation with Paul Gilligan started?
KORY MERRITT: Poptropica is an online game. I’ve never played it, but knew of it due to it being popular with my elementary students. The Poptropica creators (author Jeff Kinney, author/editor Jess Brallier, etc.) had plans to bring Poptropica to other media. From what I understand, they were in touch with Universal editor John Glynn, who had seen my illustrations and recommended me. The Poptropica creators were actually already familiar with my stuff, since I have a story on Poptropica’s sister site, FunBrain. So after a trial stage in summer 2013, they officially picked me as the illustrator for the comic strip and the graphic novel. Paul was selected as the writer of the comic strip. He’s a cool guy, and I think his “Pooch Café” is one of the best modern newspaper comics. 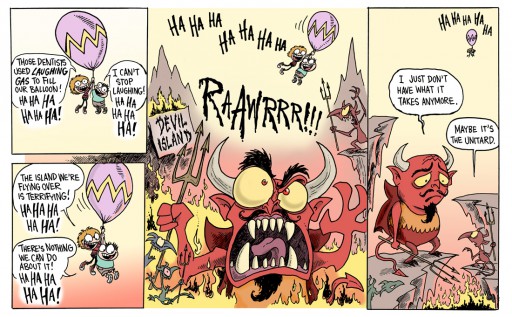 One of the Popotropica strips.

L’IDEA MAGAZINE: What is Poptropica about? (Please talk about content, characters, type of humor, etc…)
KORY MERRITT: As I said, it’s based on the online game. The main characters in the comic series are Oliver, his sister Mya, and a goofy kid named Jorge. Only Oliver and Jorge appear in the strip, but they all share the spotlight in the upcoming graphic novel. They end up in a world composed of strange islands, each with its own theme. I like the constantly-changing settings – one week I’m drawing werewolves, the next they’re on the moon.
I haven’t worked on the comic strip for a while. It was originally supposed to last only 26 weeks, which Paul and I finished last spring, but I just heard last week that they are planning to order another 26 weeks in 2015, so it will continue into next year at least.

L’IDEA MAGAZINE: You are also writing a book. What is the topic?
KORY MERRITT: Well, my books are just the “Lost Side” stories. Right now the only format I’ve been able to publish with is online. But the stories are self-contained and have a prose narrative, so I’d love them to become print books.

L’IDEA MAGAZINE: You are illustrating a graphic novel for a famous author. Are you still keeping the details secret or are we ready for the revelation of this mysterious author?
KORY MERRITT: Ah, that’s the Poptropica stuff. The famous author is Jeff Kinney, the Wimpy Kid himself – I think I’ve dropped that name a few times already. He created Poptropica and the characters from the Poptropica comics, along with author/editor Jess Brallier and some others. I’m presently drawing and coloring a 105-page graphic novel based on the Poptropica comic characters. It’s an original story from Jeff and Jess, and the script was written by Max Brallier, who has another illustrated series in the works. They’re really cool people. I’m lucky to be on board. I nearly geeked-out the first time I heard from Jeff, but luckily managed to keep it together (or at least that’s how I remember it). 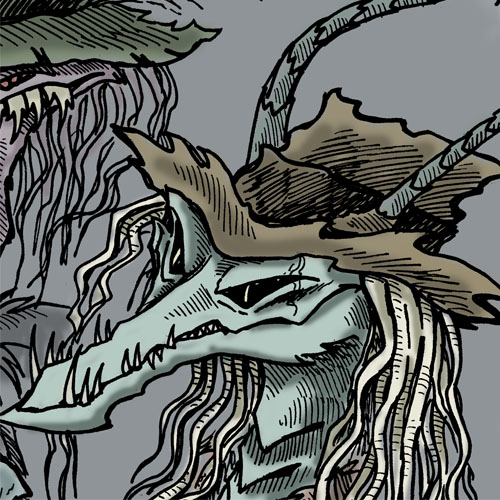 Shmeevil
After thirty years in assembly at Eastman Kodak, Shmeevil lost job and pension when the company failed to transition from film to digital. Desperate for work and money, Shmeevil sought a living in various illegal trades, falling in with a bad crowd in the process and eventually becoming right-hand goon to the notorious Phintesmo Blyme.

L’IDEA MAGAZINE: Kory, you are a cartoonist, an illustrator, a writer, and you teach Art at an Elementary School. How do you manage to juggle so many responsibilities?
KORY MERRITT: I guess staying busy keeps me out of trouble. But yes, I’m starting to have some difficulty juggling the teaching and the freelance illustration, and I’ve had to put my own stuff on hold this year. 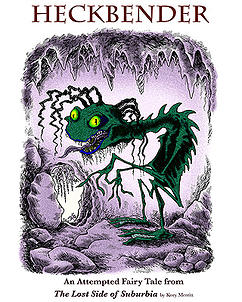 L’IDEA MAGAZINE: Do you have any new projects in the works at the moment? What about the near future?
KORY MERRITT: Poptropica stuff, and my own stories I hope to get working on soon. Weirdly, I recently had a publisher recruit me to write and illustrate a book on the World Cup, but that seems to have fallen through.

L’IDEA MAGAZINE: Do you expect to expand into novels or maybe another type of comics?
KORY MERRITT: Yes, I’d love to move to print stories. Not comics, but illustrated novels. So far I’ve only had casual interest from publishers, but I haven’t had time to really get my stuff out there.

L’IDEA MAGAZINE: Have you ever used people around you, such as friends or relatives, as characters (even though masked) in your books?
KORY MERRITT:Sure! Especially people who drive me nuts. 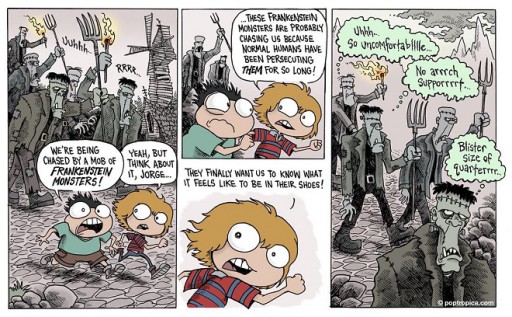 L’IDEA MAGAZINE: If you could be doing any jobs in the world, what would it be and why?
KORY MERRITT: Writing/illustrating stories! Aside from that? Something with wildlife. I’m in awe of those teams that go out and film obscure creatures.

L’IDEA MAGAZINE: Kory, if you could choose to meet a person, any person in history, regardless of time constrictions, who would that person be and why?
KORY MERRITT: Awww, I don’t know. That’s too tough. But I’ll go with someone still living: Christopher Lee, because then I can go around telling everyone I’ve met Christopher Lee. Because he’s ninety-something and more awesome than ever.