Rose Marie Boyd (Rosa Maria Maisto) grew up in an Italian section of Trenton, New Jersey, called “The Burg.”  To the background music of her mother’s native tongue, she danced around old world customs and traditions practiced by the local immigrants who lived there.  Her favorite annual tradition, the “Feast of the Lights,” a weeklong festival in honor of the Madonna di Cassandrino, was celebrated in the streets just outside her doorstep.

With the Americanization of her first name and then her marriage to Carl Boyd, Jr., Rosa Maria Maisto became Rose Marie Boyd.  However, a few old friends and many relatives still prefer to use her Italian name.

A graduate of Trenton State College and the proud mother of her successful children Jessica and Justin, she relocated to Prescott, Arizona, with her husband ten years ago.  As she basked under the Southwest sun, the writing bug decided to bite her.  Since then, she’s been expressing her creativity through poetry and novels.

An avid reader, she enjoys critiquing a bestseller or an old classic with the women in her monthly book group.  The author also loves a competitive game of tennis and volunteers for both an adult literacy program and a women’s domestic violence shelter. Check out the preview of her latest book, “The Spaghetti Set”, at: http://thespaghettiset.blogspot.com.

L’Idea Magazine: Mrs. Boyd, what has triggered your writing of this book?

Rose Marie Maisto Boyd: Although Italian was my first language (my mother spoke little English when I was young), I rarely got the opportunity to converse in Italian after I moved away from the Italian-American neighborhood where I spent the first sixteen years of my life.  After I took an Italian language class at the local community college to freshen up my skills, I decided to incorporate some of what I learned in a story loosely based on the experiences of my parents and their colorful Italian-American families in post-World War II New Jersey.  I used the stories I overheard at family gatherings as fuel for my imagination.

L’Idea: What writers have influenced you the most?

Rose Marie Maisto Boyd: I read quite a bit, at least two or three books a month.  I can’t think of any one particular author who influenced me directly. But, since I like books about interpersonal relationships, family dynamics is the focus of my writing.

L’Idea: Do you think it’s possible that Teresa will continue her adventures in a follow up book?

L’Idea: Are you presently working on another book?

Rose Marie Maisto Boyd: Yes, I’m working on a book entitled DEPENDING ON YOUR VIEW about Maria Montagna, a menopausal Italian American who has retired to a mountain community in Arizona far from her family and New Jersey paesani.   Bored, she begins to spy’s on her neighbors and eventually becomes obsessed with and involved in their troubled lives.  Maria often thinks in Italian and expresses emotions using evocative Italian phrases. 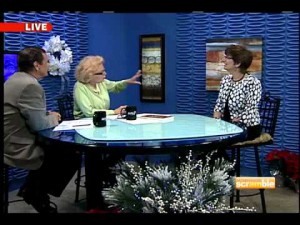 L’Idea: Do you believe Italians are only portrayed in a stereotypical manner in books and movies?

Rose Marie Maisto Boyd: Often times they are.  America is obsessed with Mafia figures so many authors depict their characters with rough personalities.  I believe my characters show another more intimate side of Italian Americans, quirks and all.

L’Idea: Do you think there are enough writers who talk about the lives, fictional or real, of Italians living in America or is that a lagging field?

Rose Marie Maisto Boyd: There are many.  But since Italian Americans have such colorful personalities there is room for more.

L’Idea: As a writer, do you believe you see life with different eyes than the average person? If so, how?

Rose Marie Maisto Boyd: Most people see things differently.  Everyone has his or her own perspective on life.  I use mine in creating my characters and their situations.  Each of them reflects some small part of me, both the good and the bad, or someone I’ve intimately encountered during my life.