Don Troiani’s methodology and artistic talent has allowed him to become one of the most respected American Wars artists ever. Standing in front of any of his works will bring you back to the times depicted, whether it is a battle of the Revolutionary War or a Civil War skirmish. The exactness of the details is astounding. The vitality of the characters and the faithfulness of their action are so natural that you feel as if you really are witnessing a piece of history and not only admiring a painting.
Author of many books and articles on military artifacts and history, Troiani is considered the most renowned expert of the Revolutionary War, Civil War and War of 1812. Troiani’s artwork has been displayed at or is represented at the West Point Museum, the Smithsonian Museum, Gettysburg National Park and many other museums, galleries, historical parks, forts and private collections.
In this interview, the artist offers our readers a fresh and heartfelt insight to his life as an artist, historian, and collector. 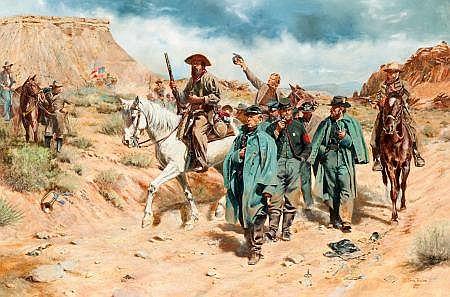 L’Idea: Italians and Italian Americans emphasize the importance of the family in their life, how it influences their decisions, their passions, and their way of life. Do you agree with this belief? If so, how did your family, and in particular your parents, influence your choices?
Don Troiani: Yes; they were a pretty big influence. My parents were antique dealers, so I was surrounded by antiques and art all the time. It also helped that my father was a commercial artist; there were always supplies around, since he often worked at home, so I was constantly monkeying with them. Note that I liked to draw, anyway, so the antiques combined with the drawing, and I started sketching soldiers and other things like that, and collecting weapons… With all the military objects my parents would run across, when they would visit flea markets and auctions, looking for things, I got to buy the military items.

L’Idea: What artist influenced your work the most and how?
Don Troiani: Edouard Detaille, [NOTE: Jean-Baptiste Édouard Detaille was a French academic painter and military artist noted for his precision and realistic detail. He was regarded as the “semi-official artist of the French army”] a French artist who lived between 1848 and 1912 and painted mostly military subjects. He understood the need for precision; he had originally studied under another French artist, Meissonier, who I also love [Jean-Louis Ernest Meissonier (1815–1891) was a French Classicist painter and sculptor famous for his depictions of Napoleon, his armies and military themes.] I was fascinated with the best examples of academic painting. I love both artists very much, but Detaille has a very strong influence on my work. I have a few original Detailles around the house, which are like little painting lessons for me…

L’Idea: You chose to depict topics mostly from the Revolutionary War and the Civil War. Why?
Don Troiani: First of all, it is my favorite time period. Furthermore, I am very interested in the American Revolution because I like the uniforms and it happened all around here, and it’s also underpainted. There are very few paintings of this important event from that period; mostly just woodcuts and few paintings done in the late 18th and 19th Century , but most of the artwork that’s been done on it, is extremely inaccurate. Actually, even many of the paintings that are being done today are extremely inaccurate as well. Few take the time to really study the era. The same thing with the Civil War; American artists didn’t paint their wars like Europeans did. You know, if you want a painting of the battle of Princeton, you have two or three to choose from, that’s it. Now I am trying to change that, so we construct these battles accurately for future generations.
[In his resolute pursuit to represent historical accuracy through his artwork, Troiani is known to examine personally the surroundings of the historical event depicted by him and to spend weeks researching details related to that event in his vast library (his Civil War library has more than 2000 tomes). His objective is to achieve authenticity, not only in the physical elements of the soldiers, but also in their posture, in the rules of engagement and use of weapons, and in the settings of the action portrayed.] 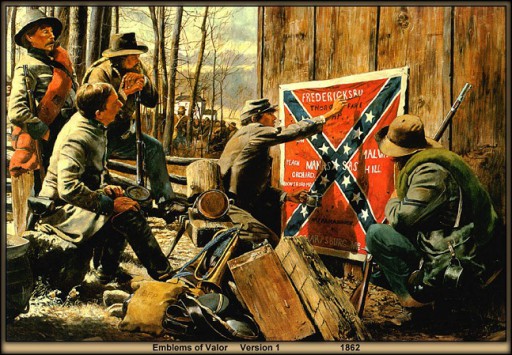 L’Idea: During the Reagan Era, you designed three coins for the US government. Could you tell me more about that?
Don Troiani: I designed three different coins for the US Mint, with three different denominations. My figures were on one side; on the other side somebody from the mint did different designs. I had some problems with the mint because they were taking my designs and altering them, making them inaccurate, as far as the uniforms and equipment went, but eventually we got it hammered out; it was a struggle, though. I also did a postal cover for the US Postal Service, a little bit before that.
[In 1995, Troiani designed the three Civil War battlefield commemorative coins, with the denomination of $1 Silver, $5 Gold and Half Dollar Clad. In 1986, the USPS issued an imprinted postcard, designed by Troiani, to commemorate the 350th anniversary of the National Guard.]

L’Idea: Few years ago, you filed a suit against the Irish government and another one against Miramax. Could you elaborate on that?
Don Troiani: The Irish Postal Service had used some of my paintings of Irish Civil War figures on postage stamps without my permission and when I confronted them about it, basically, they ignored me, so I filed a suit to block Irish postage stamps from coming into this country. They realized that I was going to be a lot more trouble than they originally thought and subsequently we made a settlement. Before the movie “The Patriot” with Mel Gibson came out, I was contacted by Miramax and their costume designer who wanted me to work on the film as a researcher. I would give them all the information they needed for the uniforms, but when I said that as part of the deal I wanted to, well, have at least a screen credit, the costume designer said “No way, forget it, you’re not getting that,” so I forgot about the film. Then, when the movie came out, I went to their website and found they had taken figures that I had done out of my books and traced off to make their costume designs. I filed suit against Miramax, and ultimately they settled, because we had them cold, copying my original artwork. The film was grossly inaccurate anyway; it was a travesty, historically speaking.

L’Idea: Is it true that you found an error in the history books and had it corrected?
Don Troiani: History books and television movies are loaded with historical errors. There are thousands of them and you will never get them all. Once, I got an offer to work for the History Channel as a consultant, and I found myself running around like a fire brigade, trying to stop them from doing crazy things, senseless, you know, really. If you watch a lot of this on TV, like a History Channel documentary, you’d better take much of it with a grain of salt. The series “America, the story of us,” for example, was historically dreadful, with silly, inaccurate material. Just because somebody works for a museum or has written a book, it doesn’t mean they know anything, and when they work for television, usually less.
[The production of an inaccurate historical documentary, especially when the lack of precision is tied to a lack of research, may be compared to an inaccurate historical painting, which, according to Troiani,” it’s worthless both as art and as a historical document.”]

L’Idea: You worked as a consultant for the movie “Cold Mountain”. Could you tell me more about that?
Don Troiani: For “Cold Mountain” I was hired to do all the research on the uniforms, equipment, flags and so forth, and tell them how to make them. On the whole they were very good to work with. Europeans usually pay much more attention than the Americans to historical details, and their films, when it comes to costume and those things, are more accurate. The costume designer Ann Roth was based in New York and she was easy to work with. Some mistakes got through, because we couldn’t be every place at once, and a lot of different filming was going on at other places; at times we had no idea what was going on, or the filming occurred before we got there, so we could not stop them from doing things they already filmed. “Cold Mountain” is still one of the most accurate civil war movies ever done, as uniforms and equipment and those kinds of things go.

L’Idea: I would be very interested to find out of what is your technique for creating your work, from the beginning to the end; whether you start with sketches, what medium do you use, how photographs enter in the process, and how else you develop you art itself.
Don Troiani: after the research is done, the models have to be posed. If it is a big picture, ten, twelve, fifteen different models are used, because you need different faces, different body types, and they’ll have to be dressed in uniform and equipment and posed for the photography. The next stage will be the composition of the painting. They are all posed to match the composition sketch and then I’ll make up a detailed pencil drawing of the whole thing on the canvas, which is usually given a little coat of Shellac, so if I make a mistake in the oil painting, I can just wipe it off and the original drawing is still there underneath. I then work on the painting, using the photographs of the details as reference. I sometimes make changes, go over or remove figures, change clothes slightly…Oil is my most used medium, but I also use watercolors and gouache.

L’Idea: What I see is an extended collection of military materials, uniforms, weapons, flags, saddles and anything else that is military-related. When did you start collecting and what’s your final goal, and is it true that you are using them for your painting?
Don Troiani: I started collecting about the fourth or fifth grade with a Civil War cavalry saber. I collect Revolutionary War materials, guns, swords, accoutrements and uniforms of 1812 War and the Civil War; also German and Japanese items, and some American militaria, from World War II. I have a pretty extensive collection because I have been hard at it for over 50 years. Much of it is used in the paintings as a visual reference. A lot of times, when I pose a model they will carry the original cavalry saber, or pistol or whatever, so I can get all the details correct; if you have an original Civil War saddle nearby, you can look at it, see exactly where the stitching goes and the fittings are, so it can be accurate in the painting. It’s its like having a museum reference collection available 24/7…