I met Piero Milani, a full time Artist Founder of Urban Underground Art Movement, in San Jose` del Cabo, in the beautiful Mexican state of Baja California Sur.  It was during a visit to his gallery, done while strolling through the streets of the Art District of this magnificent little town. Being a Tuscan by birth (Porto Santo Stefano), Piero displayed his friendliness and availability to explain his art while offering us a glass of Sangria and some tasty bits. I quote here some of the interesting conversation I had with the artist. 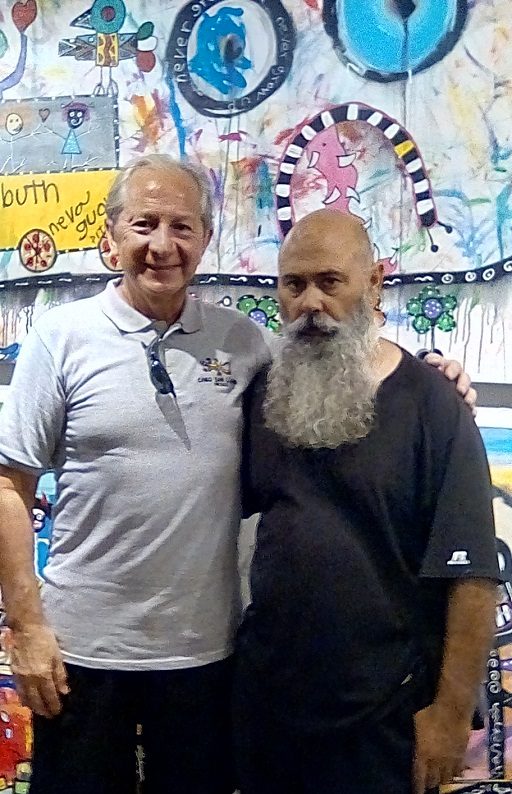 L’IDEA: You started a Foundation for children born with genetic diseases related to the eyes, the IGBE. What exactly is the IGBE?
Piero Milani: Dr Juan Carlos and I are trying to start the not-for-profit Foundation, Fundacionigbe (www.fundacionigbe.org.) The services we are trying to offer are specialized ophthalmological examination for children under 15 years of age with retinal disease and specialized genetic consultation and evaluation to determine whether the child or his/her parents or siblings are candidates for genetic testing. 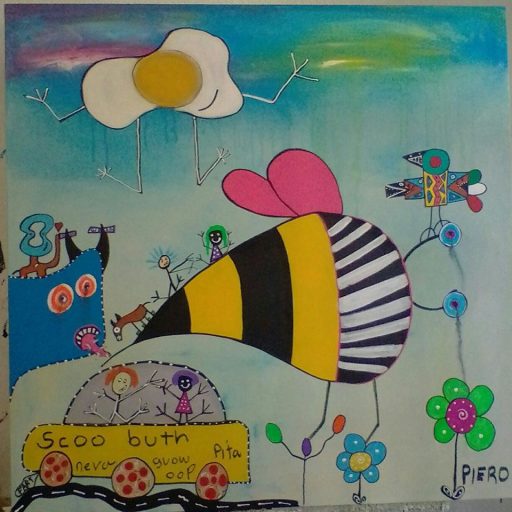 One afternoon I was sitting in my studio and something happened that would change my life forever.  A gentleman with his family entered to look at some art, and the gentleman asked me what meaning my figures had? And I told him the story of Igbe.  He answered: “I’d like to have that painting in my hospital.” I asked him what his job was and he said: “I am a doctor specializing in genetics, my name is Dr. Juan Carlos Zenteno, executive of the Department of Genetics in the Hospiatal, the most important hospital in ophthalmology and genetic deformations, called “syndrome Skulls of clover sheet” at that time. I reacted and understood that I had found my calling. 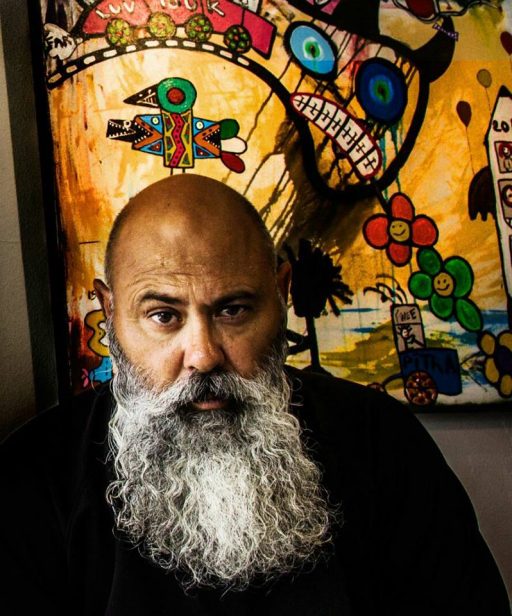 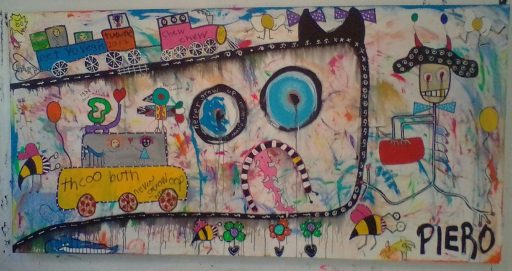 L’IDEA: Can you explain the relation between this mysterious child with genetic disease and the paintings you create?
Piero Milani: this is the story of Igbe: Igbe means International Genetics being Echo.
My work represents a child, in this case Igbe. This child was born with a Genetic defect called Clover Leaf Skull Sindrome.
Igbe wants to be an Artist so he starts to paint; in the process the child realizes that he or she is using six elements: Mind, Body, Soul, Passion, Ego, Creativity. Now Igbe is no longer sleeping; he becomes a complete human making a contribution to humanity intellectually as an Artist.
So, his or her soul becomes the Bull; he can’t spell, he’s a sloppy painter, he always runs into the bad little dude with the pitch fork the in always putting Igbe down. Despite of his disability, Igbe keeps going. Igbe loves pizza. In the end, his soul will convert into the little bird called ‘fearless freedom’. 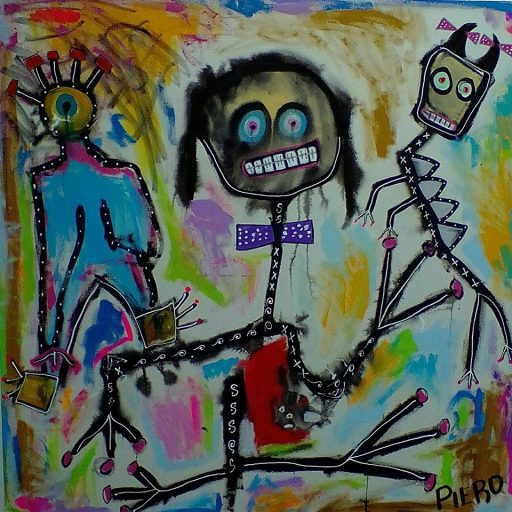 Here is a statement from the child/artist: Hi, I am Igbe. I was born in All Saints Baja California sur Mexico on June 20, 2014. My father Piero Milani, a painter, found in the street a structure of deformed head aluminum. I painted eyes, mouth and a cat that holds my body. My dad’s philosophy is to make recycled art reuse and reduce garbage to save the planet we inhabit he doesn’t need us if. We have to have consciousness that the levels of pollution are serious and if we continue in that direction, we will be many IGBEs. 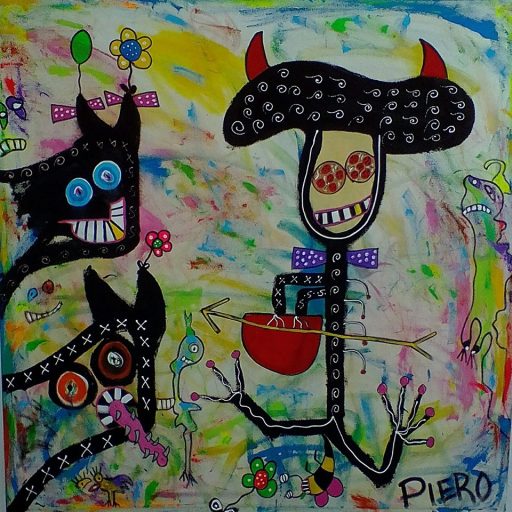 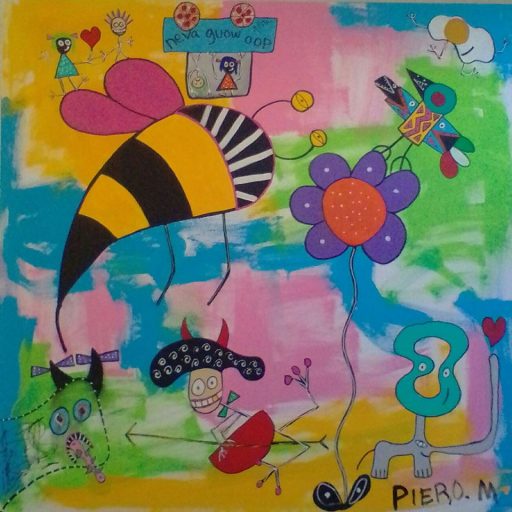 L’IDEA: How much did living in Cabo influence your art production?
Piero Milani: A lot. 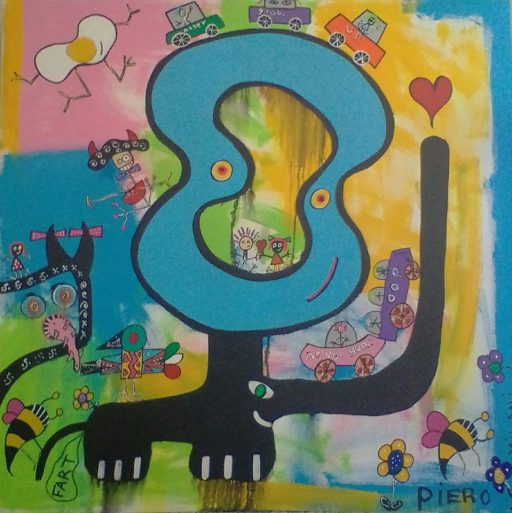 L’IDEA: Do you have any projects you are working on at this time? An in the future, are you planning any innovation or changes to your production?
Piero Milani: Just to keep painting… 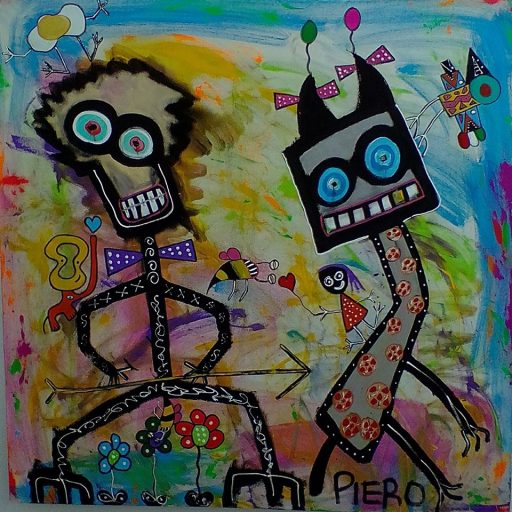 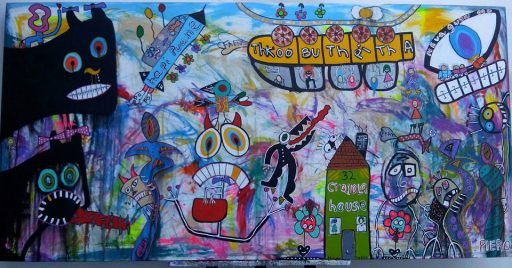 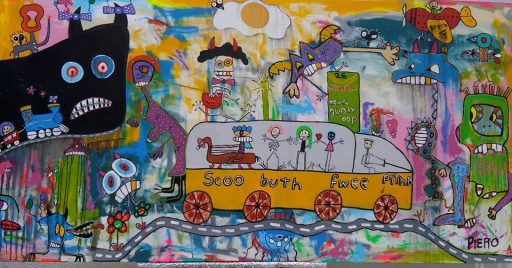 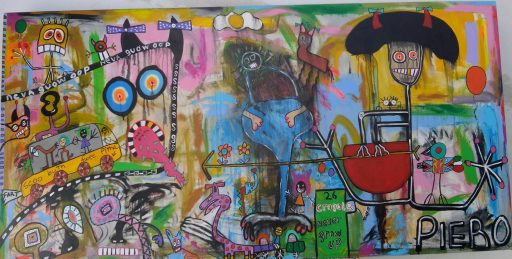 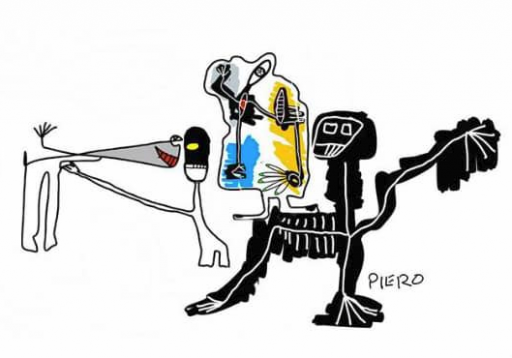