James (Jim) L. Ferraro is a practicing litigation attorney, and the founding shareholder of The Ferraro Law Firm in Miami, Florida, and one of two founding partners of Kelley & Ferraro LLP in Cleveland, Ohio. His firms currently represent nearly 50,000 asbestos claimants. The Ferraro Law Firm also has an office in Washington, D.C. that specializes in corporate tax fraud and tax whistleblower cases.

A native of Greenwich, Connecticut, Mr. Ferraro graduated from the University of Miami with a Bachelor of Business Administration in 1978 and a Master of Science in Accounting in 1979. He became a Certified Public Accountant in 1980, and taught accounting at the University of Miami in 1982 while in law school. He received his law degree from the University of Miami School of Law in 1983. He is a member of the Ohio, New York, Florida, District of Columbia, and Massachusetts Bars; the Fellows of the American Bar Foundation; the American Bar Association; the Florida Institute of Certified Public Accountants; the American Association for Justice; the Florida Justice Association; The National Trial Lawyers: Top 100 Trial Lawyers; and the Multi-Million Dollar Advocates Forum. He is a Florida State Coordinator for The Public Justice Foundation.

Mr. Ferraro has fashioned his law practice in the areas of mass torts, product liability, wrongful death, medical malpractice, environmental and family law. He has specialized in asbestos and mass tort litigation for almost thirty years, and has successfully tried many cases that resulted in multi-million dollar jury verdicts. In 1995, he received the largest compensatory award in the state of Florida for a mesothelioma case; and in 1997, Mr. Ferraro also had the highest compensatory jury verdict ever in the nation for a non-malignant asbestos case. Most recently, in August 2015, Jim tried an asbestos case against Georgia-Pacific with his oldest son, James, resulting in a $17,175,000 verdict. Based on that verdict, CVN Florida voted Jim 2015 Plaintiff’s Attorney of the Year.

He was one of ten national finalists for Trial Lawyer of the Year in 1997 for trying the first case successfully prosecuted against a chemical company for causing a birth defect. Mr. Ferraro proved that a pregnant woman’s exposure to the fungicide, Benlate, caused her child to be born without eyes and held the chemical company, DuPont, accountable in Castillo vs. E.I. du Pont de Nemours and Company and Pine Island Farms. The trial was covered in its entirety on Court TV and received worldwide attention. Seven years after trial, the Supreme Court of Florida affirmed the trial court verdict. The trial has also been documented in a book, Blindsided, just recently published.

Christian Slater said of the book: “Blindsided is a compelling and important story that holds as much social relevance today as it did when the trial against DuPont took place.”

Here is the exclusive interview he gave to Tiziano Thomas Dossena for L’Idea Magazine: 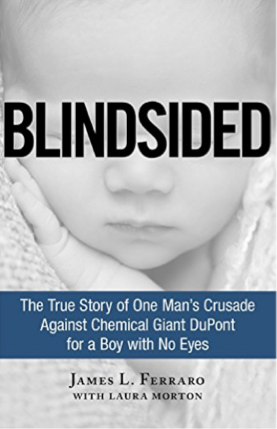 L’Idea Magazine: How did you meet the Castillo family, plaintiffs for the now-famous Castillo vs. DuPont case? What made you decide to take the case, unique and challenging as it was, both legally and financially?
James Ferraro: I received a call from an old college friend of mine, telling me about the Castillos’ story and asking me to meet with them. I was reluctant because I knew how tough these cases were to win, but I agreed to have Donna Castillo come to my office and meet with me.
Donna was very emotional and suffered a grave injustice.  However, I was not going to take the case due to the extreme level of difficulty.  After some limited research we found a study where the chemical was tested on pregnant rats and 43% of the rat offspring were born with no eyes or other ocular abnormalities.  Even though the deck was stacked against us, we decided we would take a shot.

L’Idea Magazine: Are you still in contact with the Castillo family? How has little Johnny fared since then?
James Ferraro: I have had limited contact with the plaintiffs over the years as a form of respect to their privacy and to allow them to move on with their lives.  I know the family is doing well and I am very happy that we were able to make a difference in their lives. Because of the outcome of the case, Johnny was able to afford to attend the Perkins School for the Blind.

L’Idea Magazine: This celebrated litigation being the milestone and reference for many other cases, do you feel large corporation have changed somewhat their behavior since then because of it? Do you believe the average person has now a better chance to fight these Goliaths because of the outcome of that historical lawsuit?
James Ferraro: The case set a precedent as the first of its kind, because it was the first time a chemical giant was successfully prosecuted for causing a birth defect. It also allowed the chemical Benlate to be removed from the market. However, it’s still a very difficult case, and we have a long way to go. I believe a true change will be when a law is passed at the Federal level that holds corporations accountable to the information (science/data) that is submitted to a governmental agency for licensing purposes, making that information admissible in court.

L’Idea Magazine: Do you feel that, notwithstanding the enormous success of your firm with scores of legal actions and your highly respected reputation with Mass Tort and Federal Tax Whistleblower practices, the Castillo vs. DuPont case is the one you are going to be remembered for? Is that what you would like or do you feel there are other actions and instances for which you should be celebrated or remembered for?
James Ferraro: I think I am best known for this case due to it being the first successful prosecution of its kind and also the heart wrenching story behind it. But I’ve also successfully tried many cases that resulted in multi-million dollar jury verdicts, specializing in asbestos and mass tort litigation. In 1995, I received the largest compensatory award in the state of Florida for a mesothelioma case; and in 1997, I also had the highest compensatory jury verdict ever in the nation for a non-malignant asbestos case.
Most recently, in August 2015, I tried an asbestos case against Georgia-Pacific with my son, James, resulting in a $17,175,000 verdict. Based on that verdict, I was voted the 2015 Plaintiff’s Attorney of the Year.

L’Idea Magazine: Large corporations have used experiments funded by them to get approval by the government to use a particular chemical and then called the same experiment ‘junk science’ when a lawyer from the plaintiff side wants to use the same experiment in court against them, often getting away with their action (junk-science defense.) You were the promoter of a law to allow an experiment, which was previously used to obtain a license to sell a chemical, to be used as evidence in court. Has that initial movement gained any strength and support since then and what can people do to help with this issue?
James Ferraro: Currently, defendants like DuPont seek to exclude science under the guise of junk science.  In this particular case, DuPont was seeking to exclude some of the science that they submitted to the EPA to get their product licensed.  I believe a law should be written whereby a corporation or individual who submits scientific data to a governmental agency for licensing purposes is admissible in a court of law.
Unfortunately, It’s not going to happen right now with the current administration. They’re anti-climate change, so this is not the right time. After the mid-term elections, if the balance of power shifts, that might be the right time to do it. The book will be out for about a year and a half, and the movie should be pretty close to being finished at that point in time.

L’Idea Magazine: Reading the book, one can perceive the persistence and determination that drove you to achieve this enormously important win over this powerful industrial giant and will feel in awe of it. Have you at any point almost lost that determination? Was there anything that almost drove you to let go of it?
James Ferraro: It was a monster undertaking. I originally wasn’t going to take the case. Once I saw the rat studios, I said, you know what, we can make a “state of the art” case, meaning you don’t have to have actual knowledge of the dangers of the product to be liable. When we went through Dupont’s document depository in Delaware, where they buried documents, we found studies that they did on their own that showed they had bad results from the rat studies too. I knew it was going to be pretty big when I got into it, but I didn’t know how big. I personally took every deposition: 63 depositions in four countries. I was sleeping four hours a night. I became like a marine.
It definitely took a toll on my personal life, and I wouldn’t recommend it to any young lawyer starting out. But I never lost determination. The more I knew Dupont was guilty, the more I was motivated to keep going and bring justice to the Castillos. 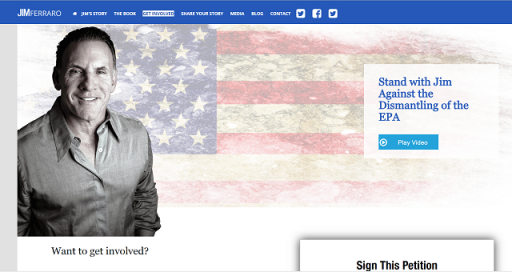 L’Idea Magazine: What exactly is Project Blindsided and how can people get involved with it?
James Ferraro: ProjectBlindsided.com  is my website, which not only has information on myself and the book, but allows the public to stand with me and fight for a stronger EPA. The EPA is the police force for the environment, and the environmental policies that keep our food, water, and air safe from poisons. Many in Washington are trying to strip the EPA of regulatory muscle. A weakened EPA puts each one of us in danger and will lead to widespread disaster in the lives of Americans, resulting in devastating maladies from birth defects to cancer.
There’s a page where readers can add their name to show their support for a strong EPA or any government agency (state or local) that will commit resources and tools needed to protect us and the environment from corporate polluters.

This great book may also be purchased at Amazon.com!