On September 9th, the Hon. Mike Spano, mayor of the City of Yonkers, officially unveiled the memorial plaque with the names of the victims of the 9/11 tragedy, at a ceremonial commemoration in the heart of that thriving city.
After a procession by the Yonkers Police Department Honor/Color Guard, there was a welcome by Richard Halevy, brother of Marion Halevy Serva, who lost her life in the Pentagon attack. He narrated his sister’s achievements and his heart wrenching speech touched everyone present. Kevin Villa, the son of one the victims, read the Pledge of Allegiance.
The National Anthem and an invocation by Mother Yamily Bass-Choate preceded the introduction of the Dignitaries, which included Senator Andrea Stewart-Cousins and five City Councilmen. 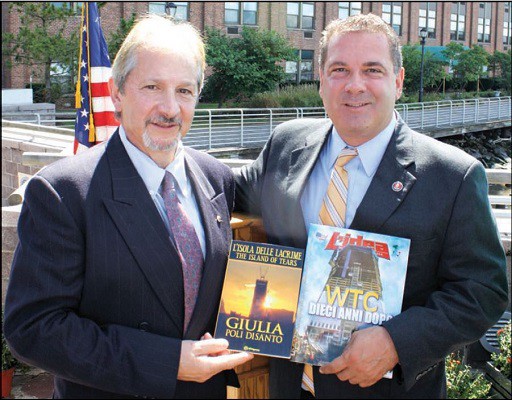 The Hon. Mike Spano spoke about the victims and the survivors, reminding everyone how that fatidic day had changed our lives forever.
After a brief musical interlude, in which stood out the ever popular song “Amazing Grace”, Tiziano Thomas Dossena, our Editorial Director, offered his reflections on the 9/11 catastrophe. He asserted that “September 11th is approaching and our heart has once more to face the unanswerable questions: why do people do things like this? Why do men hate? We grieve and reminisce. That is all that we can do to put our heart at peace. As much as our fury could be justified, fury is not and never will be the answer. We have to forgive, but not forget, stay alert but not get anxious, remember our martyrs, but not allow the ever present enemy to make more of them.”
Dossena also gave a brief explanation of Giulia Poli Disanto’s inspiration for the book The Island Of Tears, edited by Ideapress in 2012. He declared that in this book “the reader can experience the raw emotions that every New Yorker has suffered in those days” and that “the delicate verses and the gentle soul of Giulia Poli Disanto sort out all these feelings for the reader.”
His reading of two of the poems from this insightful and charming poetry collection also took place. The titles chosen were “The birds sing no more” and “The Island of tears”, which gave its name to the book. The public stood completely silent, in reverence both to the occasion and the depth of the verses’ message.
The author and editor from Yonkers concluded his oration by stating that “September 11th is a day to unite people across the country, not to divide by internal hatred or strife. Let’s remember, then, those who have died that day and their families by trying to be what they would want us to be: people who love even when tempted to hate.”
The reading of the names of the victims by their respective Councilmen and the ceremonial tribute of throwing a rose for each of them into the Hudson River lead to the final unveiling of the memorial plaque, which is sited on Yonkers’ Waterfront.